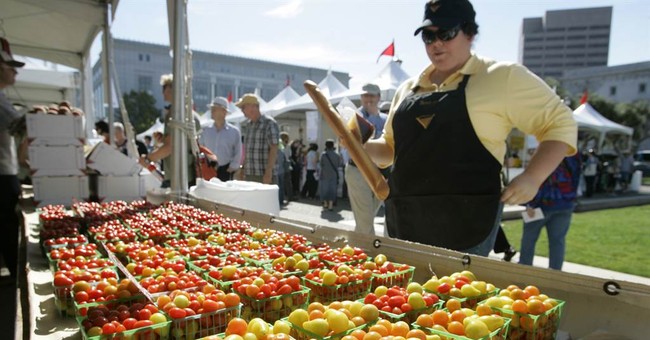 A new battle over religious freedom is brewing in Michigan after a farmer expressed his traditional views about marriage, which cost him his gig at a local farmer’s market.

After posting his beliefs on Facebook, Steve Tennes, who owns a 120-acre farm in Charlotte, Michigan, was warned by an official in East Lansing that protests could erupt if he tried to sell his produce at the city’s farmer’s market.

But nothing happened, and he continued selling his fruit until October.

It was only after East Lansing officials made an issue of it earlier this year that the problems began. The officials banned him from participating in the market when it starts up again June 4, pointing to an anti-discrimination law that covers sexual orientation as the reason.

The Marine veteran and his wife, an Army veteran, responded by suing for religious discrimination.

“My wife Bridget and I volunteered to serve our country in the military to protect freedom, and that is why we feel we have to fight for freedom now, whether it’s Muslims’, Jews’, or Christians’ right to believe and live out those beliefs,” he told The Daily Signal.

“The government shouldn’t be treating some people worse than others because they have different thoughts and ideas.”

“This is about them operating a business that discriminates against LGBT individuals, and that’s a whole different issue,” he told the Lansing State Journal.

“Policies like East Lansing’s are unconstitutional and limit the right of people to freely live out their faith and even explain their religious views,” ADF Legal states. “At Alliance Defending Freedom, we are challenging these types of laws in Arizona, Colorado, Minnesota, and Wisconsin because the doors for the Gospel of Jesus Christ must remain open.”