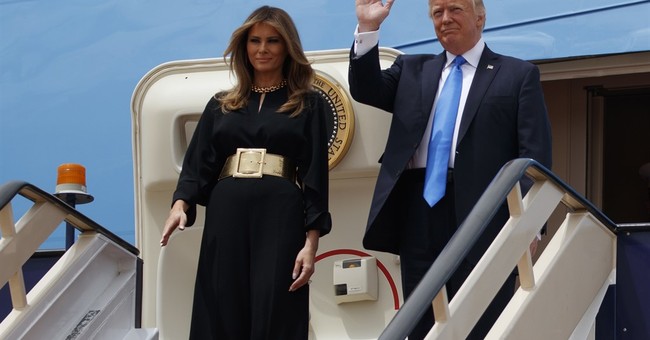 Saudis were equally impressed with Ivanka. The hashtag #bintTrump, Arabic for “Trump’s daughter” was trending on Twitter in the Kingdom. She’s so popular, the president is often referred to as abu Ivanka, or Ivanka’s father.

Had the honor of visiting 1st all-women process service center in #Riyadh, #SaudiArabia. Thanks to @GE_Saudi for the invite! pic.twitter.com/qTloc4PtCJ

Today I met with Saudi Arabian women leaders and learned directly of their accomplishments, challenges & vision for the future. #POTUSAbroad pic.twitter.com/npimDyD95u

“Saudi Arabia’s progress, especially in recent years, is very encouraging but there’s still a lot of work to be done and freedoms and opportunities to continue to fight for," Ivanka said at the roundtable.

“In every country around the world women and girls continue to face unique systematic, institutional, cultural barriers, which hinder us from fully engaging in and achieving true parity of opportunity within our communities," she continued. "Each of you know this to be true. And yet the stories of Saudi women, such as yourselves, catalyzing change, inspire me to believe in the possibility of global women’s empowerment.”