Theresa May: It's “Ridiculous” to Remove 'Easter' From Egg Hunt Event 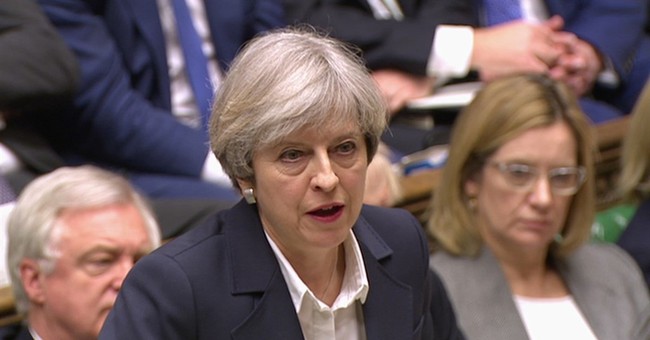 British Prime Minister Theresa May called the decision to drop ‘Easter’ from an egg hunt held by Cadbury and the National Trust “ridiculous.”

The Cadbury Egg Hunt will be held at roughly 300 of the conservation charity’s properties. And while Easter is mentioned on the National Trust’s webpage promoting the event, it’s missing from the logo.

"I think the stance they've taken is absolutely ridiculous and I don't know what they're thinking about,” she told ITV News.

"So I think what the National Trust is doing is frankly just ridiculous."

The National Trust, which May is a member of, said claims it is trying to downplay Easter are false.

"It's nonsense to suggest the National Trust is downplaying the significance of Easter. Nothing could be further from the truth,” said a National Trust spokesman, reports ITV.

"We host a huge programme of events, activities and walks to bring families together to celebrate this very special time of year.

"A casual glance at our website will see dozens of references to Easter throughout.

"Our Easter events include our partnership with Cadbury's, which has been running Easter egg hunts with us for 10 years.

"They've proved consistently popular with our members and visitors. As part of its wider marketing activity at Easter, Cadbury's will always lead on the branding and wording for its campaigns."

A spokesperson for Cadbury’s followed up, saying suggestions ‘Easter’ was removed on purpose are “not true.”

"It is simply not true to claim that we have removed the word 'Easter' from our marketing and communication materials,” the spokeswoman said, reports ITV.

"Each year our Easter campaigns have a different name and this year our seasonal campaign is called the Cadbury's Great British Egg Hunt.

"It is clear to see that within our communications and marketing we clearly state the word Easter and include it in a number of promotional materials, including our website, where we do also promote our partnership with National Trust at this seasonal time of year."

The National Trust has since updated the banner on its webpage promoting the egg hunt. It now reads, “Join the Cadbury Egg Hunts this Easter.”