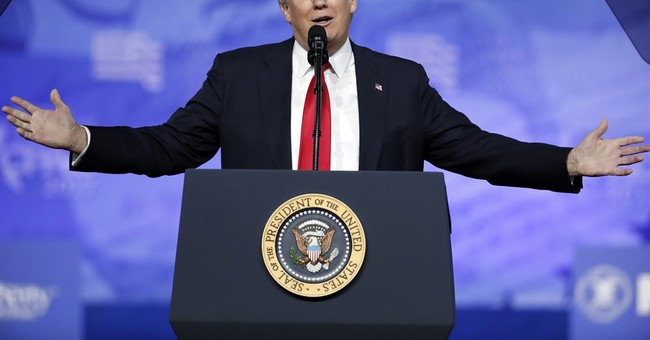 President Trump is expected to sign an executive order Tuesday that mandates the Environmental Protection Agency to review the Obama-era Clean Water Act, which expanded Washington’s authority over state and local waterways.

Trump cannot rescind the rule outright, as that has to be done through a formal regulatory process. Instead, it orders the EPA and the Army Corps of Engineers to formally reconsider the rule. That, however, could kick off the repeal process or lead to significant changes being written.

The 2015 regulation, also known as Waters of the United States, asserts federal power over small waterways such as wetlands, headwaters and ponds, requiring Clean Water Act permits for any actions that could harm or pollute them. The Obama administration said 117 million Americans’ drinking water relies on those waterways.

The rule is currently on hold. The Court of Appeals for the Sixth Circuit, based in Cincinnati, ordered it halted in 2015 while numerous lawsuits challenging the rule wind their ways through the court system.

Scott Pruitt, the current EPA head and former attorney general of Oklahoma, led one of the lawsuits.

To Republicans and such industries as agriculture, developers and energy companies, the rule would have added a major new burden by requiring costly permits for numerous land uses. Opponents say its definitions are so broad that puddles could be put under federal control. […]

The order specifically asks the agencies to consider the late Supreme Court Justice Antonin Scalia wrote in the 2006 case Rapanos v. United States, saying the Clean Water Act ought only to cover navigable waters and waterways “with a continuous surface connection” to them — a far more restrictive definition than what the Obama EPA put into its rule.

The official said the EPA will also be instructed to ask the Sixth Circuit court to put the litigation against it on hold while the administration reviews it.

The House Oversight and Government Reform Committee said in an October report that the rule is “a case study in legal shortcuts, predetermined conclusions, and politically motivated timelines.” And 31 states have challenged it in court.