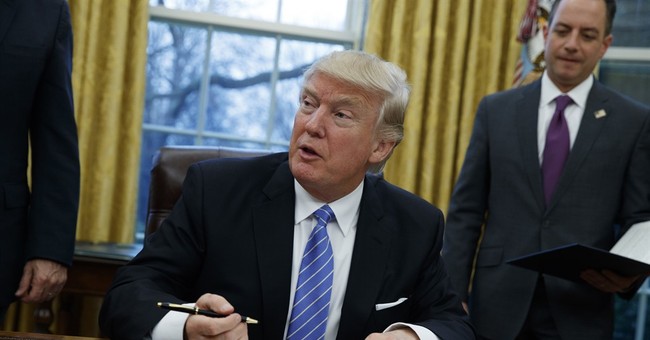 President Trump on Thursday signed a bill getting rid of an Obama-era coal mining rule, the second environmental regulation he nixed from the previous administration this week.

The bill, which Trump called “another terrible job killing rule,” puts an end to the Office of Surface Mining’s Stream Protection Rule that protects waterways from coal mining waste. The regulation was finalized in December.

Ending the regulation will save "many thousands of American jobs, especially in the mines, which, I have been promising you — the mines are a big deal," he said during the signing.

"This is a major threat to your jobs and we’re going to get rid of this threat," he added. "We’re going to fight for you.”

Earlier in the week Trump ended the Congressional Review Act resolution, which does away with a financial disclosure requirement for energy companies.

Both the mining and financial disclosure bills are the tip of a GOP push to undo a slate of regulations instituted in the closing days of the Obama administration. The House has passed several CRA resolutions, and the Senate has so far sent three of them to President Trump for his signature.

Regulators finalized the stream protection rule in December, but they spent most of Obama’s tenure writing it.

The rule is among the most controversial environment regulations the former administration put together. The coal mining industry said it would be costly to implement and lead to job losses across the sector, which is already suffering from a market-driven downturn in demand for its product.

A bipartisan group of senators and congressmen praised the job-saving resolution Thursday.

“I have led the fight against this rule since my first days in the Senate because it simply isn’t commonsense and would kills jobs in our state,” said Democratic Sen. Joe Manchin. “With the signing of this measure, we officially overturn this harmful regulation and can now focus on helping the many West Virginia families and businesses that are experiencing the negative effects of the war on coal. My concerns were not just with the rule itself, but with the rule-making process that led to it. Not only did the Department of the Interior and OSMRE fail to consult with stakeholders and consider the economic impacts, including the possible elimination of thousands of jobs, but they also refused to acknowledge that the rule conflicted with EPA authority and was duplicative of existing regulations under laws such as the Clean Water Act.”