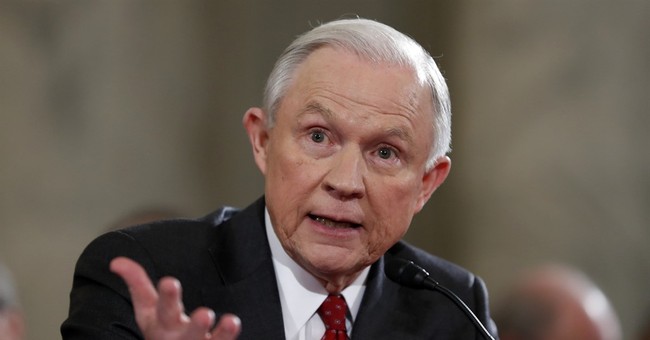 The president of the NAACP’s Alabama chapter said the award the group purportedly gave then-Sen. Jeff Sessions is “bogus.”

The honor in question is the 2009 Governmental Award of Excellence, which surfaced while aides were cleaning out Sessions’ Mobile, Ala., office in preparation for his move to the Department of Justice.

The plaque, which has Sessions’ name on it, lists that the award was given during the NAACP’s Civic and Human Rights Convention in Mobile April 23-26, 2009, “for the outstanding work you do.”

But the president of the group’s Alabama branch denied the award was given to him, going so far as to say it was “made up.”

A formal statement by the state chapter also questioned the award.

"Alabama State Conference of the NAACP has learned of a plaque that is in Senator Sessions possession that indicated it was given to him by the NAACP for Governmental Award of Excellence in April 2009. President Benard Simelton, who has been President of the Alabama State Conference since October 2009 stated that he was not aware of this award being presented to the Senator or any of his staff. Simelton was present at the convention during the time this award would have been presented according to the date on the award."

McConnell did leave open the possibility that it was presented to Sessions by an individual member.

"We do know, and it was confirmed, that there were some Republicans who were very active members of the NAACP then, that it could have possibly came from them. That being said ... different people give us sponsorships and give us moneys and stuff to support events like this. So we're thinking that that's a possibility, that maybe someone that was on the Republican end or whatever, was part of the planning committee or whatever, who knew and had access to how we order plaques and stuff like that could have possibly done it, but as far as the president, who was at that time on the state and the local level, have no knowledge of him or his staff every receiving the governmental excellence award," she said, reports AL.com.

Either way, the NAACP’s Alabama chapter promised to hold Sessions accountable for his decisions as U.S. attorney general.

"The Attorney General has a significant responsibility to the people of the United States to ensure the laws are enforced fairly and that the Civil Rights and Voting Rights of all citizens are protected. Senator Sessions and his supporters have stated that he is not a racist, that he will be fair in his judgement and will not let the President influence his decision making," Simelton said in a separate statement. "The Alabama State Conference of the NAACP will hold him accountable for all these important decisions coming from the Department of Justice."