Krauthammer: We All Need to Be Thanking Harry Reid for Gorsuch 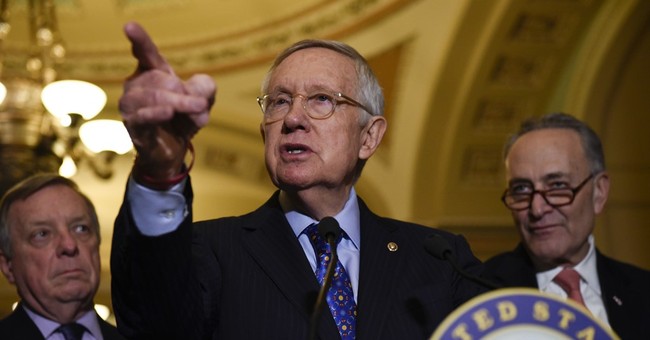 When Harry Reid finally left Congress, conservatives rejoiced that his contemptible tenure in Washington, marked by extreme partisanship and baseless slanders, had finally come to an end. And while it’s hard to find much to be thankful for about the Nevada senator, writing in the editorial pages of The Washington Post Friday, syndicated columnist Charles Krauthammer says there is one thing: Judge Neil Gorsuch.

Yes, Hillary Clinton’s defeat in the 2016 election clearly played a huge role, as did Sen. Mitch McConnell’s refusal to move on Obama’s SCOTUS nominee—but it’s Reid that conservatives ought to be most thankful for, he says.

God bless Harry Reid. It’s because of him that Gorsuch is guaranteed elevation to the court. In 2013, as Senate majority leader, Reid blew up the joint. He abolished the filibuster for federal appointments both executive (such as Cabinet) and judicial, for all district and circuit court judgeships (excluding only the Supreme Court). Thus unencumbered, the Democratic-controlled Senate packed the lower courts with Obama nominees.

Reid was warned that the day would come when Republicans would be in the majority and would exploit the new rules to equal and opposite effect. That day is here.

The result is striking. Trump’s Cabinet appointments are essentially unstoppable because Republicans need only 51 votes and they have 52. They have no need to reach 60, the number required to overcome a filibuster. Democrats are powerless to stop anyone on their own.

And equally powerless to stop Gorsuch. But isn’t the filibuster for Supreme Court nominees still standing? Yes, but if the Democrats dare try it, everyone knows that Majority Leader McConnell will do exactly what Reid did and invoke the nuclear option — filibuster abolition — for the Supreme Court, too.

Reid never fully appreciated the magnitude of his crime against the Senate. As I wrote at the time, the offense was not abolishing the filibuster — you can argue that issue either way — but that he did it by simple majority.

Reid’s lack of foresight—something many of his Democratic colleagues warned him about—is Republicans' gain for now.

As for keeping the nuclear option for Supreme Court nominees? Krauthammer says Republicans will keep the advantage given to them by Reid through the GOP’s current tenure in the White House and Congress. But only when that time nears its end should Republicans get ready to press the reset button, he argues.