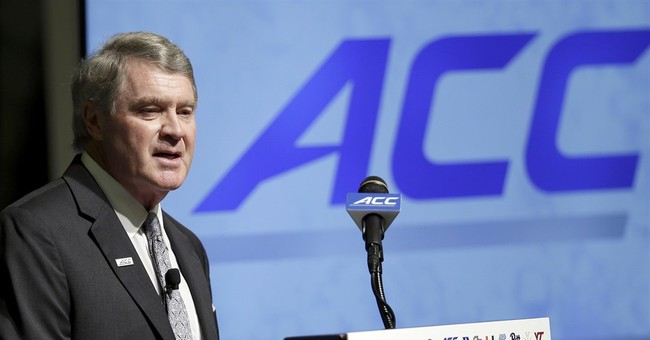 Protests over North Carolina’s bathroom law continue with the Atlantic Coast Conference deciding to move its football championship game from the state to Orlando.

The law, which requires that people use the public restroom that corresponds to their biological gender rather than the gender they identify with, has been called discriminatory by opponents, leading to companies, sports and entertainment figures pulling business from the state.

The conference’s move comes after the NCAA made a similar decision to pull its championships from the state. And while it wasn’t required of them, the league’s Council of Presidents noted in a statement that it did so in order to “uphold the values of equality, diversity, inclusion and non-discrimination.”

“Every one of our 15 universities is strongly committed to these values and therefore, we will continue to host ACC Championships at campus sites,” reads the statements. “We believe North Carolina House Bill 2 is inconsistent with these values, and as a result, we will relocate all neutral site championships for the 2016-17 academic year. All locations will be announced in the future from the conference office.”

The game will still be held on Saturday, Dec. 3.