Obama: Gun Control Is Necessary ‘If You Care About the Safety of Our Police Officers’ 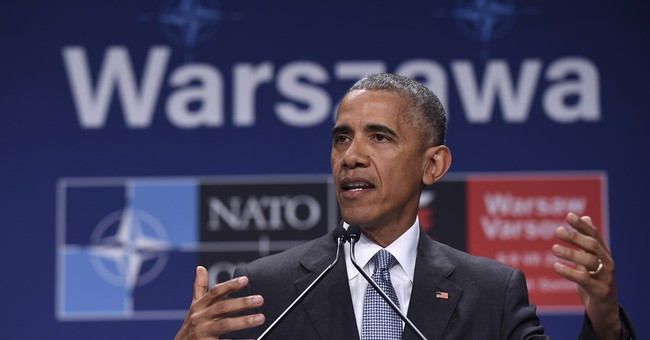 Speaking from the NATO Summit in Poland on Saturday, President Obama dismissed rhetoric that the nation is sharply divided and back to where it was in the 1960s.

"We have to make sure that all of us step back, do some reflection and make sure that the rhetoric we engage in is constructive and not destructive. That we're not painting anybody with an overly broad brush and we're not constantly thinking the worst in other people rather than the best."

The president said it’s been a “tough” week in America, after two black men were killed by police in Minnesota and Louisiana, and five law enforcement officers were murdered and six others injured by a sniper at a Black Lives Matter protest in Dallas.

While taking questions, the president also responded to those who criticized him for mentioning gun control during his first statement on the Dallas attack.

“Now with the respect to the issue guns,” he said before audibly sighing. “I am going to keep on talking about the fact that we cannot eliminate all racial tension in our country overnight. We are not going to be able to identify ahead of time and eliminate every madman or troubled individual who might want to do harm against innocent people, but we can make it harder for them to do so.”

Obama said the U.S. was “unique” among advanced countries with respect to the “scale of violence,” the nation has, clarifying that he wasn’t just referring to mass shootings, but those that occur with frequency, like in his hometown of Chicago. “The ones we just consider routine,” he added, suggesting they are related to what happened in Dallas.

“Part of what’s creating tensions between communities and police is the fact that police have a difficult time in communities where guns are everywhere,” he continued. “Now they have a low margin of error in terms of making decisions.”

He then made the case for gun control in the context of caring about the safety of police.

“If you care about the safety of our police officers, you can’t set aside the gun issue and pretend that’s irrelevant,” he said, adding that Texas’ open carry law was one of the challenges Dallas police faced Thursday evening when they were being shot at.

“I’m not going to stop talking about it,” Obama continued. “It’s part of the problem.”