After Alliance With Cruz to Block Trump, Kasich Tells Indiana Voters to Support Him Anyway 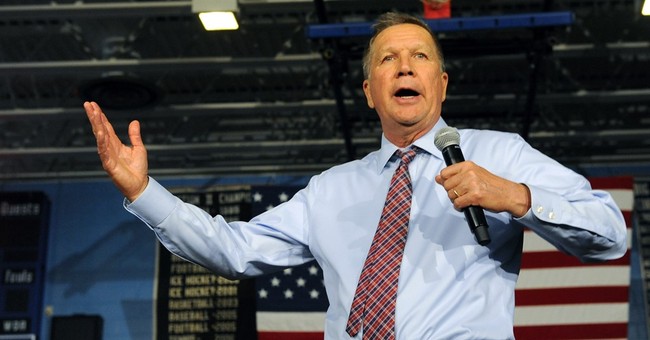 So much for helping Sen. Ted Cruz win Indiana. After Gov. John Kasich and Texas Sen. Ted Cruz joined an alliance on Monday to block Donald Trump, with the former pledging to stand aside in the Hoosier State, the Ohio governor urged voters there to support him anyway.

All he agreed to was to not spend “resources” there, he explained.

Adding to the mixed messaging was the fact that Kasich planned to travel to Indianapolis Tuesday for a private fundraising event, despite canceling two planned public rallies in Indianapolis and Noblesville.

Kasich made the remarks approximately 13 hours after his campaign announced an arrangement to give rival Ted Cruz "a clear path" in Indiana, which holds a winner-take-all primary next week. In exchange, Cruz is to give Kasich a clear path in Oregon and New Mexico in an effort to prevent front-runner Donald Trump from attaining the necessary delegates to seal the GOP nomination before this summer's national convention.

"It's not a big deal," Kasich said of the agreement, which he described as a recognition of the realities of the campaign. Kasich has only won one primary contest, in his home state of Ohio, but has insisted he can win the Republican nomination at a contested convention.

Meanwhile, Cruz touted the agreement on Monday as “big news” and said Kasich essentially pulling out of the state is “good for the men and women of Indiana.”

“It’s good for the country to have a clear and direct choice,” he told reporters.

But not all pundits are convinced the plan will work.

After news that Kasich’s apparently still telling voters in Indiana to support him, they may not end up making the tough choice at all.

Indiana will hold its primary on May 3, where the winner will get 30 delegates immediately, while three more are up for grabs by the winner of each of the state’s nine congressional districts.