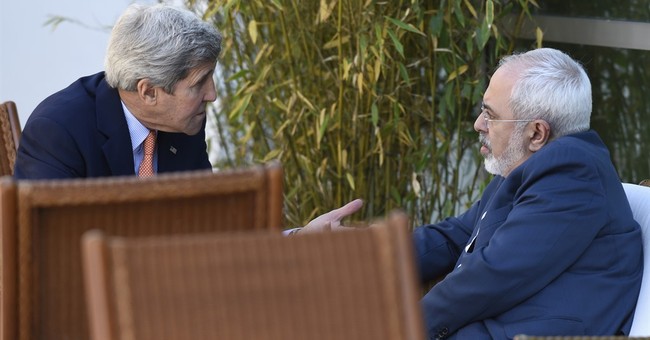 Is the Obama administration conspiring with Iran? After listening to the State Department’s press briefing on Wednesday, when spokesman Marc Toner basically admitted as much, Mark Levin sure seems to think so.

So, rightly, Matt Lee of the Associated Press wanted to know whether Rubio’s legislation was necessary—namely, is the U.S. allowing foreign banks and governments to make trades in U.S. dollars for deals involving Iran so long as our currency doesn’t end up in the Iranians’ hands in the end.

The exchange, which can be read in full here, is truly shocking.

“What I would say is that we continue to advise banks and other governments on ways that they can conduct business with Iran in a way that does not violate existing U.S. sanctions," Toner said. "And there are ways to do that, but it does not involve banks converting money to dollars or otherwise."

But Lee fired back, pointing out that it does involve U.S. dollars because of the way international financial commerce is structured. He then more directly confronted Toner, asking him to confirm what he essentially just admitted: That the U.S. government is coaching banks and businesses on how to do deals that avoid U.S. sanctions.

“Is that the role of the U.S. government?” Lee asked.

“So what I would say in response is that as Iran complies with the JCPOA and receives a certain amount of sanctions relief, it is incumbent on us,” Toner responded, “it is incumbent on us to live up to our end of this deal, which is to – and part of that is to advise these banks and governments on ways that they can –“

Lee finished his sentence: “Avoid U.S. sanctions.” To which Toner followed up “precisely” before trying to backtrack.

After a lot of back and forth here’s where the questioning more or less ended:

QUESTION: Well, okay. Well, what – then, what is it? What are they – they’re telling them, “Here’s what you can do to not violate U.S. sanctions.” I understand the way you’re putting it is you’re telling them what they can do that is legal, but --

MR TONER: I just think it is – again, it’s part of an effort to provide guidance to ensure that they understand clearly the extent of U.S. sanctions relief, and it’s complicated. And to advise them on that is not necessarily giving some kind of tacit approval to – or somehow some workaround by which they can avoid – or loopholes, as you put it. I think that’s just not what we’re trying to do, but --

MR TONER: It’s advising them on how they can do – I guess that they understand the extent of U.S. sanctions relief that’s been provided under the deal so that they can carry out appropriate actions – again, as stipulated under the JCPOA with – yeah, sorry --

After reflecting on the exchange, Levin rhetorically asks: “Is this not treason?”

“Supplying arms and financing to an enemy that says ‘death to America’? Well if that’s not treason what the hell is?”