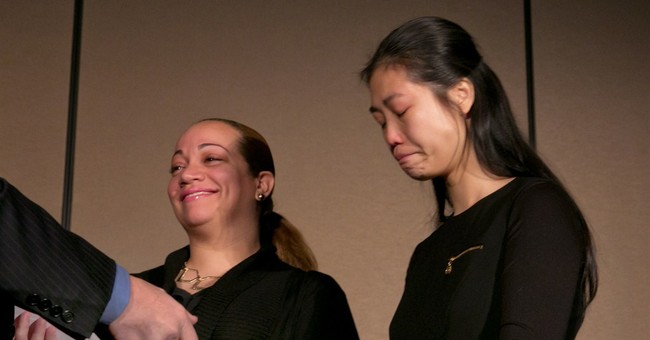 With tearful eyes, grateful widows Pei Xia Chen and Maritza Ramos embraced Frank Siller, chairman and CEO of the Stephen Siller Tunnel to Towers Foundation, at a news conference held earlier this month to announce that more than $800,000 had been raised to pay off the mortgages on their homes.

Just days before Christmas, their husbands, NYPD Officers Wenjian Liu and Rafael Ramos, were gunned-down while sitting in their patrol car in Brooklyn. Officer Ramos was a devoted father and husband, and Officer Liu and his wife were newlyweds, married only a couple months.

But amid the grief, the families still had to deal with reality.

Siller, who lost his firefighter brother on 9/11, knew the foundation had to help.

“The Sillers knew firsthand what it was like to lose a family member so quickly, so violently, they knew what the emotions are like, and they know that in the middle of all the emotions you’re still going to have some real practical considerations; you still have to pay bills, you have to make sure you have money in the bank,” Catherine Christman, the foundation’s director of media relations, told Townhall.

First, the foundation set its sights on paying the monthly mortgage to alleviate the families’ immediate concerns, but the effort soon mushroomed into paying the mortgages off entirely.

“Basically, within 10 days’ time we were able to raise over a million dollars … from every state in the United States, and from foreign countries like Australia, England, Italy.”

Rising to the occasion to help others in times of need is exactly what the foundation was set up to do—that was, after all, the way Stephen Siller lived his life, and the way he died, too.

Having just finished the late shift at Squad 1, Park Slope, Brooklyn, he was ready to hit the links with his three older brothers when the call came in that a plane had hit the North Tower of the World Trade Center.

The father of five headed back to the firehouse to get his gear and made his way toward Manhattan.

Undeterred by the fact that the Hugh Carey Tunnel, formerly the Brooklyn Battery Tunnel, had already shut down, Stephen strapped 60 pounds of equipment on his back and ran nearly two miles from the tunnel to the towers, where he gave up his life while saving others.

His heroic journey is remembered and honored each year on the last Sunday in September, when tens of thousands of people follow his footsteps in a 5k organized by the foundation, which his family set up soon after his death as a way to honor Stephen's sacrifices, as well as those of our nation’s military and first responders.

“After Stephen was killed that day, [his siblings] had a choice; they could either become bitter and angry or they could channel all of that energy and emotion into lighting a candle and extending blessings in Stephen’s name,” Christman explained.

Clearly, they chose the latter.

Last year, roughly 35,000 people from around the world participated in the 5k to support America's bravest.

Among the participants were firefighters who ran with their equipment, mimicking exactly what Stephen did; West Point cadets who jogged as a unit, chanting as they went; and others, including wounded warriors, who walked to show their solidarity.

It’s truly a sight to be seen, Christman said.

Looking out at the sea of participants a few years back, former New York City Mayor Rudy Giuliani, who’s the chairman of the annual 5k, explained why terrorism will never defeat the American spirit.

“He recounted one of the last times he had been in that same spot and the devastation and the ruins and the loss of life, and the difference now as he looked out; the triumph, the victory, the celebration. He said ‘this is why they will never win because they don’t count on people like Stephen Siller, that’s not part of their equation when they’re putting it all together, and all the other folks like Stephen that day,’” Christman recalled the mayor saying.

Beyond the annual 5k, the foundation is also involved in several other projects ranging from a mobile 9/11 exhibit to building Smart Homes for severely injured service members returning home from war.

Building for America’s Bravest has become one of the foundation’s signature programs, allowing wounded veterans and their caregivers to maximize their personal independence.

The high-tech homes, which are controlled through iPads, are completely customizable to suit the needs of the wounded veterans.

“It’s just a wonderful way to acknowledge the heroism and hard work these guys did,” Christman explained.

“When you are there the first time they come into their homes and you see how their faces light up and their eyes light up and they realize what a life-changing event this is thanks to the generosity of all our donors, it’s just so heartwarming,” she continued. “It’s pretty humbling to realize you’re part of that and then to connect those dots back to Stephen Siller and what he did that day, and to know that he’s living on in this very meaningful way.”

By the end of 2015, the foundation and its individual donors and corporate sponsors will have helped make dreams of independence and home ownership for more than four dozen wounded warriors come true.

To learn more about the foundation and how you can help America's bravest, please visit Tunnel2Towers.org and OurBravest.org.

Photos and video courtesy of the Stephen Siller Tunnel To Towers Foundation.