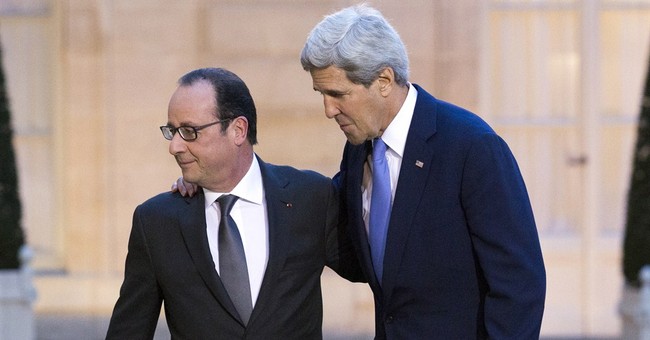 As if the United States’ absence at Paris’ Unity Rally last weekend wasn’t enough of a national embarrassment, the way the Obama administration tried to make amends was even more so.

In case you missed it, Secretary of State John Kerry visited Paris on Friday—a week too late, mind you—to finally show our solidarity with the French people after three days of terror in which 17 people were killed.

“My visit to France is basically to share a big hug for Paris and express the affection of the American people for France and for our friends there who have been through a terrible time,” Kerry said before going.

But he wasn’t alone; with him was ‘70s icon James Taylor, who was there to sing “You’ve Got a Friend”—you know, to really drive the point home. And the poor woman forced to hold the microphone in front of Taylor? That would be Paris Mayor Anne Hidalgo.

So, what did the media and others think of Kerry’s belated, awkward, and ridiculous gesture?

“I can’t think of a better definition of ‘soft power’ than James Taylor blasting out across the universe to seduce us with his dulcet tones,” BBC Paris correspondent Hugh Schofield said.

The editorial board of the NY Daily News, which already slammed the administration in a powerful cover after the rally, went further, calling the move “tone deaf” and “as bad a diss as President Obama’s no-show failure to appreciate the gravity of this moment in the war on terror.”

And to conservative radio host Rush Limbaugh? Well, he was “embarrassed to be an American” that day.