Massacre in Nigeria "Deadliest" in History of Boko Haram 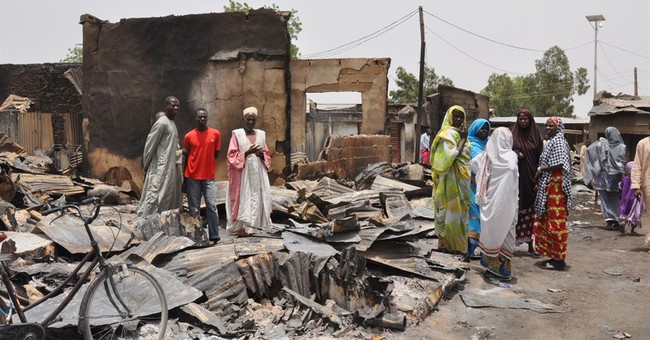 While the world’s attention was focused on the terrorist attack in France this week, far too little notice was given to a much larger attack by Islamist extremists in Nigeria. In an assault that lasted days, Boko Haram militants carried out a scorched earth campaign in the northeastern part of the country, killing, looting, and burning everything in sight. Amnesty International described the attack as the "deadliest massacre" in the history of Boko Haram.

During the raid that started January 3, hundreds of gunmen seized the town of Baga and neighboring villages, as well as a multinational military base.

Attacks started at dawn and continued throughout last weekend, according to residents.

Though local officials gave conflicting death tolls, they agreed on the massive number of fatalities.

More than 2,000 people were killed in attacks on 16 villages, Bukar said. He could not explain how he arrived at that toll.

But the local district head said hundreds of people had been killed, not thousands. The actual toll will be known after a headcount of households is complete, Hassan said.

An offensive is underway to reclaim the areas from the militants, according to Mike Omeri, a government spokesman.

Boko Haram gained notoriety earlier this year after kidnapping roughly 200 schoolgirls, who are still missing, by the way. But they’ve also conducted a number of large-scale attacks since then, and declared their own caliphate in the country.

Clearly, the Nigerian government is struggling to keep the militant group in check, but why? The Christian Science Monitor weighs in:

Nigerian President Goodluck Jonathan has pledged to put an end to to the group's reign of terror, but Boko Haram has refused to negotiate with the current government, which is lead by non-Muslim political party. If anything, Boko Haram's attacks are intended to display the government’s inability to effectively respond and influence the outcome of the next election. Boko Haram boasts firepower, discipline, and seems to benefit from links to well-funded organizations such as al-Qaeda.

In 2013, the Nigerian military descended on Baga in response to an attack by Boko Haram fighters. The effort, during which critics accused soldiers of executing more "destruction than protection," at least 37 people were killed and 2,275 homes were destroyed. When Boko Haram overtook Baga on January 3, government soldiers abandoned post left unarmed citizens to defend themselves.

"We are very dispirited," Borno North senator Maina Maaji Lawan told BBC. "There is definitely something wrong that makes our military abandon their posts each time there is an attack from Boko Haram."

Clearly, though, Boko Haram is not just Nigeria's problem anymore, especially since the group threatened Cameroon in a video this week, and has set its sights on expanding territory into the neighboring country.

"A global threat calls for a global response. Such should be the response of the international community, including the African Union and our regional organizations," Cameroon's President Paul Biya said in a speech earlier this month.