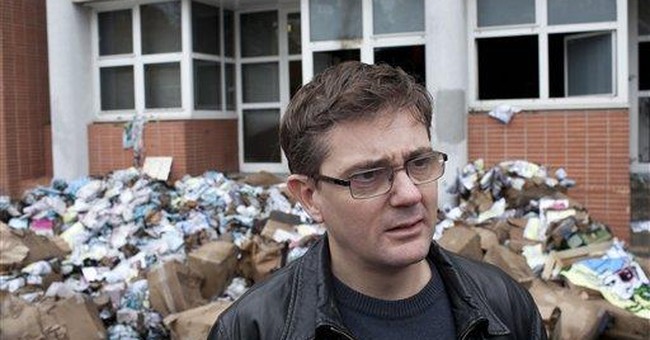 Based on the gamut of religions, peoples, and countries editor and publisher Stephane (Charb) Charbonnier satirized, it's clear political correctness had no place at Charlie Hedbo. Free speech always ruled the day, even after the publication was bombed for printing a Mohammed cartoon and Charb himself was placed on al Qaeda’s wanted list for ‘crimes against Islam.’ The threats were constant but so too was his resolve.

“I am not afraid of retaliation. I have no kids, no wife, no car, no mortgage. It surely is a bit dramatic but I'd rather die on my feet, than live on my knees," the editor told Le Monde back in 2012.

It is extremely sad and pathetic, then, that on the very day Charb and many of his colleagues were gunned down by terrorists in their offices, some Western media outlets have spinelessly given in to the demands that Charlie Hedbo vehemently fought against to the very end.

Exhibit A: In a report about the terrorist attack today the Daily Mail blurred out the infamous cover that led to the Nov. 2, 2011 bombing of their magazine’s office.

Exhibit B: Similarly, The Telegraph censored the offending images from their report.

Here is what they were afraid to run:

Other Western outlets like The New York Times and NPR have omitted the offending images from their reports as well.

It should be noted, however, that many journalists around the world (and French citizens) have refused to be intimidated and therefore have raced to show their solidarity with Charlie Hedbo.