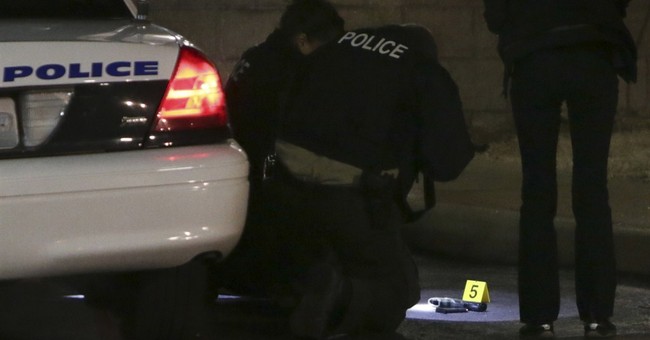 Since Officers Rafael Ramos and Wenjian Liu were assassinated in their patrol car on December 20 there have been more than 50 incidents of reported threats against NYPD officers. But the targeting of police is happening all across the country.

A department spokesperson said Officer J.T. West was sitting in his marked patrol car working on a report when he saw two suspicious men coming up from behind his car near an abandoned apartment building.

West got out of his car to speak to the men, but before he could say a word, one of them pulled a handgun from his waistband and fired six shots at the officer. One of the bullets struck the police vehicle.

West returned fire, getting off two shots as he ran for cover across the street. West dove behind a staircase in the abandoned apartment complex, injuring his wrist as he fell. […]

Had Officer West not noticed the men approaching the rear of his vehicle, things would have ended very differently. And despite the fact that the incident mirrored the NYPD assassination, my colleague Bob Owens over at BearingArms.com notes that the attack has been largely ignored by the mainstream media:

The obvious copycat nature of the attack and its near success was simply ignored by WRAL and wasonly noted in passing by ABC 11. The RaleighNews & Observer—infamous for their support of eugenics and backing the Ku Klux Klanin the only successful coup against an elected government in American history—likewise failed to mentionthe obvious similarities to the assassination of the two NYPD officers.

The national news media has not mentioned the attempted assassination at all, though it continues to fawn over the “social justice” revolutionaries using the mythologies of “Hands Up, Don’t Shoot” and “I Can’t Breathe” as they disrupt lawful commerce, attack police officers, riot, and loot private businesses.

It’s open season on police, and, sadly, there’s no end in sight.