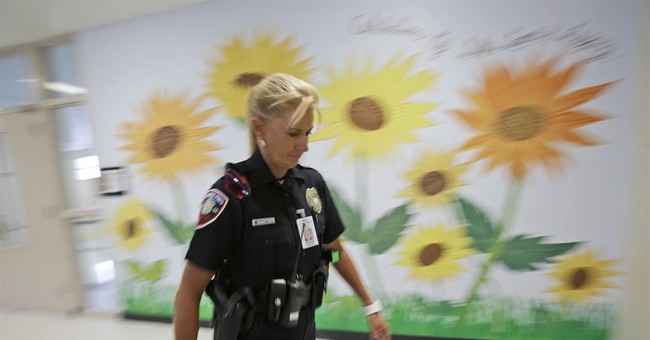 In the wake of the massacre at Sandy Hook Elementary School in 2012, the National Rifle Association proposed putting armed security officers in schools across the nation. According to a 2013 Rasmussen survey, most Americans agreed with the organization’s proposal.

“The only thing that stops a bad guy with a gun is a good guy with a gun,” the NRA’s Wayne LaPierre said at the time. And he’s right—just look what happened in Oregon this week.

"As soon as this happened, they were there in less than a minute," Staton said. "Had they not been there, it could have been a lot worse."

One of the first dispatches to police was at 8:07 am: In the boy's locker room, two shots, one person down.

"I believe their quick response saved many of our students' lives," Anderson said. "For that, our community and I thank you."

At least one officer fired gunshots.

And this isn’t the first time we’ve seen a ‘good guy’ with a gun stop a school shooting before it escalated, either. In December, an armed resource officer at Arapahoe High School in Colorado cornered the shooter, at which point he turned the gun on himself. The entire attack lasted only 80 seconds.

Here’s to hoping other schools across the country will recognize the importance of an armed guard and do everything they can to be prepared, should the unthinkable happen.