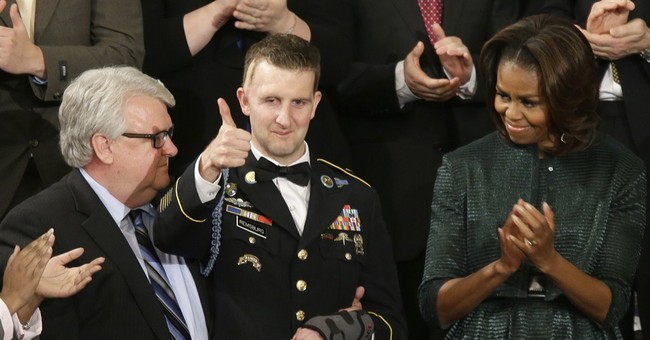 If you made it through the end of the SOTU last night, you’ll know that the best part was undoubtedly the amazing story of Sgt. Cory Remsburg, and watching the subsequent standing ovation this hero deservedly received.

And then NBC News ruined it when Senior Political Editor Mark Murray, who's married to an Obama official, tweeted this:

To Murray, deploying 10 times and being severely injured by a roadside bomb somehow compares to the challenges Obama has faced in his political life. Huh?

He explains further in a blog post (italics mine):

“America has never come easy”: Last night’s speech also ended on an emotional — and upbeat — note when Obama recognized Army Ranger Cory Remsburg, who was almost killed in Afghanistan and continues to recuperate from a brain injury. “My fellow Americans, men and women like Cory remind us that America has never come easy,” the president said. “Our freedom, our democracy, has never been easy. Sometimes we stumble, we make mistakes; we get frustrated or discouraged. But for more than 200 years, we have put those things aside and placed our collective shoulder to the wheel of progress.” That story could also apply to Obama himself: Nothing in his seven years on the national political stage (2007-2014) has come easy. The 2008 race for the Democratic nomination. Even that general election. The health-care law. The re-election campaign. And now the president’s current situation in which he finds himself bloodied and bruised after the botched health-care rollout. Perseverance is an important quality for any president. Bill Clinton was usually able to talk his way out of sticky situations. But Obama’s M.O. is to grind it out. That, more than anything else, was the message he wanted to send last night — both he and the country are grinding it out.

No, Murray—that story does not, in any way, apply to Obama himself. What is apparent, however, is that the media is now stealing pages from Obama’s own playbook--inserting himself into every situation possible. Unbelievable.

This has got to be the most disturbing example of fan boy ever. Thanks, @mmurraypolitics. https://t.co/3DKsDN5VGc