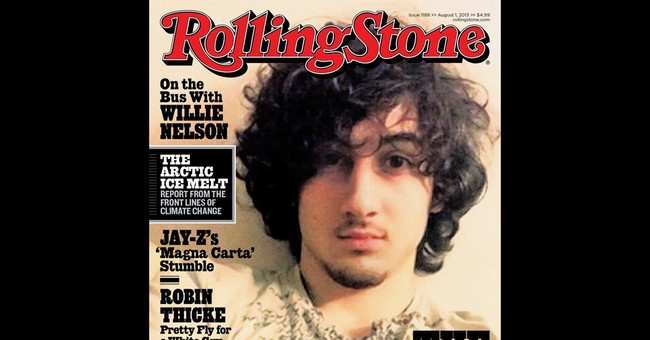 Judge Jeanine Pirro didn’t mince words Saturday when discussing Rolling Stone’s decision to feature Boston bomber Dzhokhar Tsarnaev. In the epic monologue below, Pirro rails against everything from the editorial decision to run a feature on a terrorist, and why our society is so obsessed with excuses, to the U.S. justice system, which is more consumed with the rights of criminals than victims. If you have about 10 minutes to spare, I highly recommend watching the clip in its entirety. If not, a few notable quotes from the judge are below.

-- “We coddle criminals as if they were the violated, not the ones doing the violating. We’ve got it ass backwards; we celebritize criminals, cloak them with respectability, make them look hip and rocker-cool, and our hearts bleed for the ordinary kid—surely the good kid gone astray. He doesn’t seem so bad. And we long to find sensible reasons for the most brutal of crimes as we stitch together a quilt of excuses—student loans, divorced parents, failed by his family, falling into radical Islam. And then we engage in a national therapy session—'how did we lose him,' 'where did we go wrong?' Why do we look so hard to find excuses—this dirt bag worked hard to maim and kill innocent Americans who themselves worked hard to train their bodies to run a marathon, only to come face to face with evil. Before our eyes, a terrorist is turned into a rock star.”

--“And for those of you out there saying, ‘He’s presumed innocent,’ let me tell you the truth about the presumption of innocence. The phrase innocent until proven guilty does not mean that those of us who’ve examined the evidence before trial must stick our heads in the sand and draw no conclusion whatsoever. We don’t drag people into court because we assume they’re innocent. We indict them because we believe they’re guilty and there’s probable cause and extremely damning evidence that supports that.”

-- “Dzhokhar, I don’t like your mother and you take after her. You came here to feed off the fat of our land like the rest of your family to suck us dry. You shouldn’t have been allowed here in the first place. And you hate us? You write “F--- America” on the inside of the boat that you were cornered in? I’d like to respond to that one but my mother’s watching.”

-- “Dzhokhar, you’re not the one in pain. You’re not a rock star, you’re not a cover boy, you’re a damn terrorist, the spawn of Satan who should go directly to Hell sooner rather than later.”