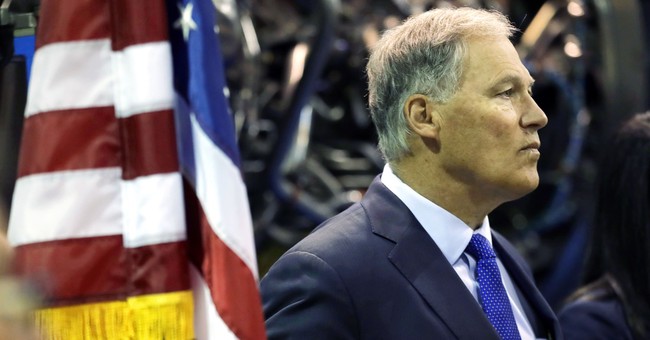 Washington Gov. Jay Inslee (D) made some dramatic remarks on the campaign trail over the weekend, telling a New Hampshire crowd that “we have exactly one chance left to defeat climate change – and that’s during the next administration.”

“If it’s not job one, it won’t get done,” he explained. “And I’m the only candidate that’s saying that right now.”

“I wonder the difference between talk and action,” he said Saturday. “Between bumper stickers and productive accomplishments. It can’t be just one of those things on your to-do list. It has to be a full-scale, full-throated commitment to get this job done.”

Despite Inslee’s claims that he could be the “last chance” to save humanity from climate change, he’s faced some tough questioning about his failure to lower greenhouse-gas emissions in Washington during his time as governor. They actually increased by 6.1 percent from 2012-2015.

The current text of that resolution proposes “overhauling transportation systems in the United States to remove pollution and greenhouse gas emissions from the transportation sector as much as is technologically feasible,” and “upgrading all existing buildings in the United States and building new buildings to achieve maximum energy efficiency, water efficiency, safety, affordability, comfort, and durability.”

One study estimates that implementing the resolution would cost $93 trillion over ten years.