DHS Secretary Kirstjen Nielsen Warns That U.S. Is 'Not Prepared' for Cyberattacks From Foreign Countries 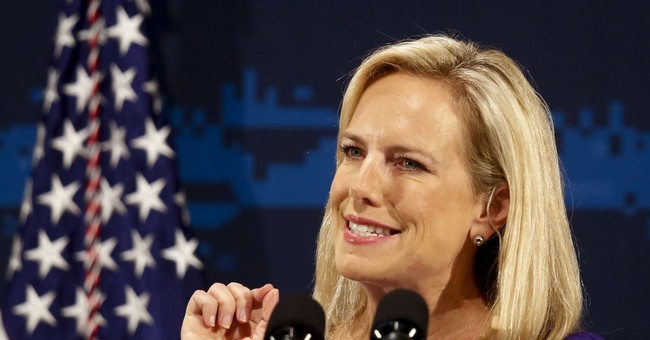 Department of Homeland Security Secretary Kirstjen Nielsen warned Monday that the United States is “not prepared” to handle cyberattacks from foreign countries and laid out some measures DHS was taking to respond to these threats.

“Today I am more worried about the ability of bad guys to hijack our networks than their ability to hijack our flights,” Nielsen said during her speech at George Washington University.

“America’s not prepared for this, your average private citizen or company is simply no match against a nation state such as China, Iran, North Korea, or Russia,” she emphasized. “It’s not a fair fight and until now our government has done far too little to back them up.”

“Nation states, criminal syndicates, hacktivists, terrorists, they’re all building capacity to infiltrate and undermine our networks, they are weaponizing the web,” she said, citing cases like North Korea’s WannaCry ransomware which was spread to over 150 countries and Russia probing the U.S. energy grid and wreaking havoc with their malware.

Nielsen pointed to the tough response from the U.S. to cyberattacks which includes sanctions that, she argued, have sent a “powerful message” to perpetrators. She added that DHS will be working with the Department of Defense to address these threats.

“Let me just send one last message to our cyber adversaries,” Nielsen concluded. “You cannot hide behind your keyboards and computer screens, we are watching you. And no matter what malware you develop, I promise you, the engines of our democracy are far stronger and far more resilient than any code you can write.”