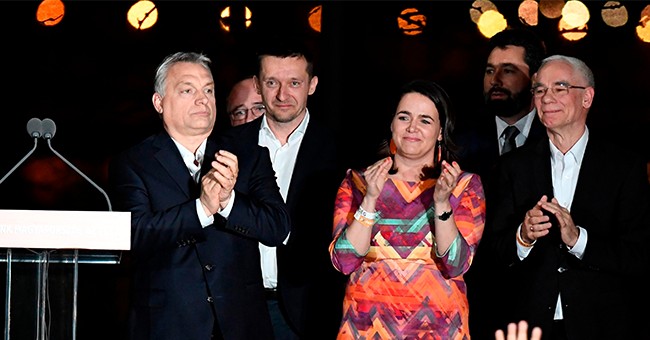 Washington, D.C. – Hungary, like the vast majority of Europe, is struggling with birth rates that are significantly below replacement level. Over the past eight years, however, the country has seen a 17 percent increase in the fertility rate. The Hungarian Minister for Family and Youth, Katalin Novak, spoke with Townhall about the success the country has seen with its robust pro-family policies, how these policies were devised, and the new, seven point plan the government is launching to provide aid for young families.

The generous plan includes a complete personal income tax exemption for women raising four or more children, which lasts all of their lives, and subsidies for families with at least three children to buy larger cars. It also makes grandparents who care for children instead of the parents eligible to receive a payment for childcare.

This package comes from work the government began in 2010, Novak told Townhall, an effort which yielded significant results.

As Novak highlighted, since the implementation of government programs to benefit families, not only has the fertility rate increased but the marriage rate is up by 43 percent, the number of divorces has decreased by 20 percent, and the number of abortions has gone down by 25 percent.

Novak explained how the government devised these policies by taking a special look into the challenges young people face in their decisions about marriage and starting a family.

“We are just watching the young people and trying to understand their fears, their challenges, their obstacles, and we see that Hungarian young people are very pro-family,” she said. “They want to get married, they want to have children, at least two on average, but then somehow they don’t succeed, somehow they won’t have as many children as they wanted.”

“That was one of the reasons why we introduced this new measure,” she explained, “because it enables young people, even without any support from the parents, to be able to stand on their own.”

She said that the government approach in Hungary is that once a young person “wants to get engaged and wants to have a family, we should do all our best to enable them to do so and so that’s why we gave so many supports.”

“In Hungary, if a young couple is having a child we actually -- I mean, depending upon the number of the children -- we reduce, for example, the student loan of the woman, of the mother. That is something that doesn’t exist anywhere in the world. It is again giving help for them to be able to have as many children as they wish to and when they wish.”

While the new program carries a price tag of an estimated $500 million or 0.3% of the GDP, Novak says that the country’s economy is thriving and that the money put into these programs is not viewed as an expenditure.

“I wouldn’t even call the money spent on family issues an expenditure, rather an investment,” she said, “because you know what can you invest in the best? You can have a strong economy or labor market, you can invest in industry or agriculture in any field, but you can best invest in your people and that’s actually the family, through the family policies.”

In response to the criticism that tax relief would do little to help poorer families, Novak pointed out that the country “used to have an unemployment rate of over 11 percent in 2010 and now we are at 3.5." She said it made sense to “link family subsidies to work” as the government wants to build a “work-based society.”

“We want to enable people to work and to have a decent work and a decent salary and the more children they have the less personal income tax they have to pay,” she emphasized.

“Social policy focusing really on the poor, on the underprivileged, on the Roma, that’s very important and we are running many, many programs on this matter,” she added. "But it has nothing to do with family policy.”

She said that regardless of the financial situation a Hungarian family faces, “you still can appreciate the support that you get for raising children.”

Novak added that the program provides options for both stay-at-home and working mothers.

“We have a three year long parental leave. The fathers are also eligible for that,” she said."But you can return to your workplace after six months and keep all the family benefits that you would otherwise have.”

In regard to the decrease in the country’s abortion numbers, Novak is “hopeful” that the array of choices and economic stability these programs offer has helped women to choose to continue with their pregnancies.

“I don’t think that there are women or mothers or potential mothers who dreamed of having abortions,” she said. "That is maybe for them a last solution for something.”

She said these woman can truly be empowered “once you give them financial stability and stability in all ways, not only financially but mentally."

“You have to give an option to mothers who are bearing an unwished child, let’s say, to keep it,” she argued, or help them give the child up for adoption.