Pope Francis Calls for 'All Out Battle' Against Sex Abuse But Disappoints Victims, Leaves Unanswered Questions 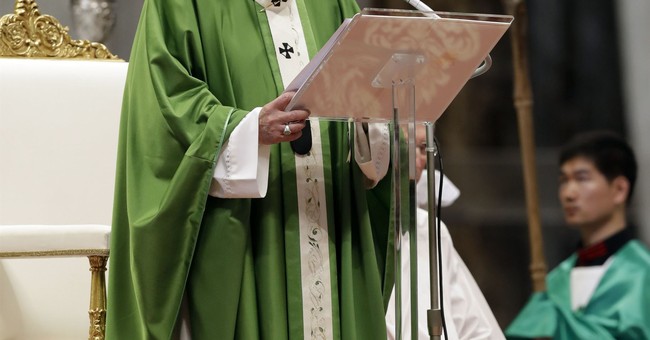 Pope Francis spoke Sunday at the conclusion of a four-day Vatican summit addressing the sexual abuse of minors in light of recent scandals in the Church. The Church has been grappling with the Pennsylvania grand jury report which uncovered the abuse of thousands of minors by 300 priests in addition to revelations of abuse perpetrated by prominent Church leaders, such as former D.C. Cardinal Theodore McCarrick.

“I make a heartfelt appeal for an all-out battle against the abuse of minors both sexually and in other areas, on the part of all authorities and individuals,” the pope said, “for we are dealing with abominable crimes that must be erased from the face of the earth: this is demanded by all the many victims hidden in families and in the various settings of our societies.”

Throughout his speech, the pope highlighted instances of child abuse worldwide and also pointed to statistics showing that most abuse occurs within the home.

“The first truth that emerges from the data at hand is that those who perpetrate abuse, that is acts of physical, sexual or emotional violence, are primarily parents, relatives, husbands of child brides, coaches and teachers,” he argued.

“We are thus facing a universal problem, tragically present almost everywhere and affecting everyone,” he emphasized. “Yet we need to be clear, that while gravely affecting our societies as a whole, this evil is in no way less monstrous when it takes place within the Church.”

He called instances of abuse in the Church “all the more grave and scandalous” because they are “utterly incompatible with her moral authority and ethical credibility.”

“Consecrated persons, chosen by God to guide souls to salvation, let themselves be dominated by their human frailty or sickness and thus become tools of Satan,” he lamented.

In the Church’s approach to confronting the crisis, however, he cautioned against both “justicialism provoked by guilt for past errors and media pressure, and a defensiveness that fails to confront the causes and effects of these grave crimes.”

He also argued that the Church “must rise above the ideological disputes and journalistic practices that often exploit, for various interests, the very tragedy experienced by the little ones.”

The pope mentioned some guidelines the Church would focus on moving forward in addressing the issue. They included the protection of children, the Church refusing to “hush up” any of these cases, and reviewing current Church guidelines.

Summit moderator and former Vatican spokesman Father Federico Lombardi later said that the Vatican will soon release a child protection policy and guidelines for preventing sexual abuse of minors for Vatican City State and a handbook for bishops to better comprehend their duties in these matters.

The address by Pope Francis met with criticism from some survivors and the media, given his unwillingness to address allegations of his own cover-up in the case of former Cardinal Theodore McCarrick.

The summit follows the laicization, or dismissal from the priesthood, of McCarrick after a Church investigation deemed sexual assault allegations against him were credible. The allegations included that he abused a minor during the sacrament of confession and sexually abused seminarians.

The pope has also faced criticism after he was forced to apologize for “errors in judgment” after calling accusations of cover-up against Bishop Juan Barros a “calumny” for years. He admitted to sex abuse survivors that he had been “part of the problem” in that instance. He accepted Barros’s resignation in June.

Another, more recent issue that has come under scrutiny is his handling of the case of Argentine Bishop Gustavo Zanchetta who received a top Vatican job in 2017 as the pope’s confessor despite complaints, reportedly known to the Vatican as early as 2015, of inappropriate sexual behavior with seminarians as well as having gay pornography on his phone.

When Crux reporter Ines San Martin attempted to ask about the pope’s credibility given the Zanchetta case, the bishops pointed to the ongoing investigation and argued that the summit had provided “extraordinary answers” for these sorts of cases.

Some abuse victims said that they were disappointed by the pope's words Sunday.

“I did not hear a ‘sorry’ ... I didn’t hear anything, anything concrete, nothing that was fair,” he told Reuters. “It is they who destroyed us. This isn’t enough, we are not satisfied.”

“There is nothing in his remarks about releasing documents that demonstrate the truth of how they are and have been covering up child sex crimes,” U.S. survivor Peter Isely, of the victim advocacy group Ending Clergy Abuse said. “So what that is, is secrecy. So, if he is against secrecy about cover-ups, on Monday morning, we would be seeing those archives and criminal evidence released.”