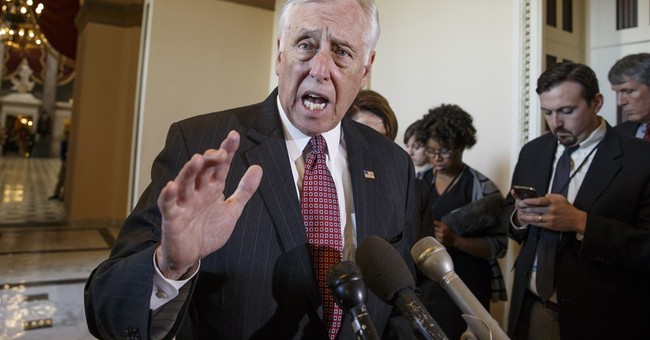 “Given the now well-documented election fraud that took place in NC-09, Democrats would object to any attempt by [Mark] Harris to be seated on January 3,” Hoyer said in a statement. “In this instance, the integrity of our democratic process outweighs concerns about the seat being vacant at the start of the new Congress.”

Hoyer’s statement came just after the North Carolina state board of elections dissolved Friday without certifying the results from the 9th Congressional District. That dissolution was due to an unrelated, lengthy court battle over the board’s constitutionality.

The board refused to certify Harris as the winner in November due to evidence of irregularities in the absentee ballot count and allegations of fraud conducted by a Republican operative working on Harris's campaign.

Dallas Woodhouse, executive director of the North Carolina Republican Party, told CNN Friday that the elections board "failed in their duty" to certify the election. Woodhouse claimed that Harris had been cooperating with the board's investigation.

While the board has dissolved, its staffers can work on the investigation, but "they will not be able to issue subpoenas, hold hearings or call for a new election," Josh Lawson, the board's general counsel, told CNN.

In the unofficial count, Harris led by 905 votes over Democratic candidate Dan McCready. Harris filed an emergency petition Friday to get the results certified.

"As you know, your client (Harris) is under a subpoena dated December 1, but has made only one production on December 7 totaling 398 pages," Malcolm wrote. "Yet your client through counsel indicated that you possess roughly 140,000 additional documents that may be responsive but have not yet been produced. We have received repeated assurances—as recently as December 24—regarding your efforts to comply with the subpoena.”

"You are hereby requested to fully comply with the Board's subpoena so as to not further impact the agency's ability to resolve the investigation," he concluded.

"He's not required to send to a Democrat every piece of paper a campaign ever put forward," Woodhouse commented on CNN. "By the way, it is irrelevant. The board of elections needed to establish that these things happened, that they happened at all. Mr. Harris only ever touched his ballot. His. He doesn't have anything to add. This was an absolutely atrocious smear by a disgraced democrat elections chair, the former chair now on the way out. It is unconscionable."

A new board is expected will be appointed on January 31, 2019 and Republicans have rejected the idea of an interim board appointed by Democratic North Carolina Gov. Roy Cooper as “unconstitutional.” Gov. Cooper announced Friday that he planned to appoint five members to an interim board.