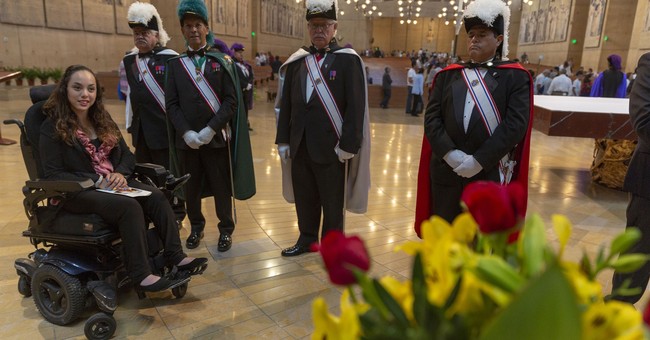 Democratic Senators Kamala Harris (CA) and Mazie Hirono (HI) recently sent some written questions to Trump judicial nominee Brian C. Buescher implying that his membership in the Knights of Columbus, a Catholic charitable organization, could affect his judicial impartiality due to what they believed to be the group's “extreme positions.”

The group replied this week by extending a special invitation to the senators to participate in their charitable events and learn about the group firsthand.

They said they read "about statements which expressed the fear that the Knights of Columbus held many extreme beliefs," writing, "it is our great pleasure to assure you that this fear is not grounded in any truth.”

“The Knights of Columbus in general, and O’Boyle Council in particular are dedicated to the three fundamental principles of charity, unity, and fraternity,” they wrote. “In the past few months O’Boyle Council has worked with local parishes including St Peter’s (House-side Catholic church) and St Joseph’s (Senate-side Catholic church) to raise funds and give away over $4,000 worth of coats to neighborhood children, collect soda and beer can tabs to donate to the Lt. Joseph P. Kennedy Institute which helps the developmentally disabled, and collect diapers and other supplies for new mothers in need.”

“Over the course of the past year we donated an ultrasound machine to a clinic, picked up trash around Nationals Park, and donated supplies to a local school. We do all this as well as social gatherings and spiritual events,” they continued. “We hope this list of activities help to assure you that we are simply a group aiming to do God’s work while building friendships.”

The group extended a formal invitation to the senators and their staff members to join them “for any social or charitable event,” including their upcoming Polar Plunge to raise funds for DC Special Olympics.

In addition to these charitable initiatives from the local D.C. chapter, the group has led efforts to help Christians targeted for genocide by ISIS in the Middle East. The organization recently partnered with the U.S. Agency for International Development to help communities in Iraq and Syria.

In her written questions, Sen. Hirono expressed concern over the group’s support of California’s 2008 referendum, supported by a majority of voters in the state at the time, which amended the state’s constitution to define marriage as being between a man and a woman.

“The Knights of Columbus has taken a number of extreme positions,” she wrote. “For example, it was reportedly one of the top contributors to California’s Proposition 8 campaign to ban same-sex marriage.”

Hirono implied that such a position on marriage, which remains the official teaching of the Catholic church, excluded Buescher from confirmation, asking if he intended to end his “membership with this organization to avoid any appearance of bias?”

Hirono also asked about the group’s position on abortion, implying once again that Buescher’s affiliation with the group hurt his impartiality.

On both issues, Buescher responded that he planned to “faithfully apply all United States Supreme Court and Eighth Circuit Court of Appeals precedent on all issues.”

Sen. Harris took up a similar line of questioning, even highlighting the fact that the group was “an all-male society comprised primarily of Catholic men.”

In addition to these insinuations that his membership in the group ruined his impartiality, Democratic Sens. Feinstein (CA) and Booker (NJ) also grilled Buescher about his past pro-life stance, repeatedly implying that it made him unfit to serve as a judge for the U.S. District Court for the District of Nebraska.