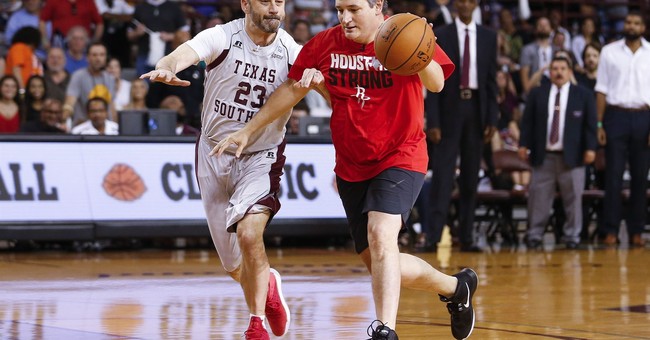 Sen. Ted Cruz (R-TX) continued his feud with comedian Jimmy Kimmel Wednesday after Kimmel sent him to hell in an irreverent skit featuring Billy Crystal as God and Dave Grohl as Satan.

In the skit, God and Satan fight over who gets Cruz and Satan ends up with him after losing a game of rock, paper, scissors.

Cruz hit back at Kimmel Wednesday tweeting "Jimmy’s feelings are still hurt that I kicked his a** at hoops."

Sen. Cruz was referencing his 11-9 victory over Kimmel in their friendly one-on-one game of basketball the two had in June after Kimmel likened Cruz to a “blobfish” and insulted his love of the Houston Rockets.

.@TedCruz – I’ll see you on the basketball field! pic.twitter.com/v7DEbgTjuf

They donated $10,000 each to charity after the game. Cruz chose Generation One Texas, which is dedicated to fighting poverty and Kimmel gave to the Texas Children’s Hospital.

WATCH: @jimmykimmel and I played a game of basketball, but most importantly, we raised over $80,000 for charity to benefit @generation1tx and @texaschildrens.