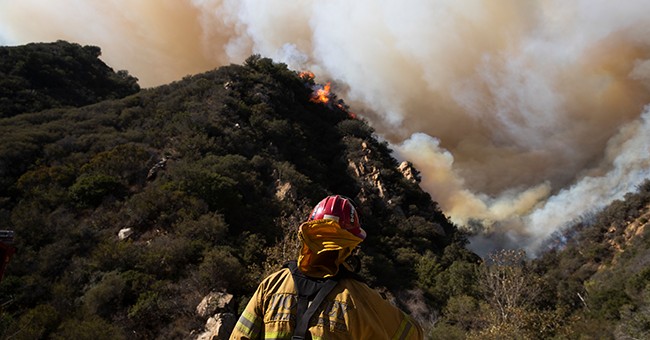 California Gov. Jerry Brown has declared a state of emergency and is calling on President Trump to make a major disaster declaration in response to the wildfires ravaging the state. The statewide death toll is now 31, with 228 people missing.

Astonishingly, Brown blamed those who deny climate change for “contributing to the tragedies,” Sunday after President Trump blamed the spread of the fires on mismanagement.

The town of Paradise, population 27,000, was destroyed last week by the Camp Fire in northern California which has burned down more structures than any other wildfire recorded in California.

The Woolsey Fire in Southern California burnt 85,500 acres and destroyed 177 structures. It is only 15 percent contained and the Santa Ana winds have worsened the situation.

Gov. Brown said at a press conference Sunday that “Managing all the forests and everywhere we can does not stop climate change and those who deny that are definitely contributing to the tragedies that we're now witnessing and will continue to witness in the coming years."

California Governor Jerry Brown just blamed climate change for the wildfires and says those that "deny climate change" are "definitely contributing to the tragedies that we're now witnessing." pic.twitter.com/c0JVarR4fx

After blaming the fires on poor management, President Trump did offer his condolences to the victims Sunday.

There is no reason for these massive, deadly and costly forest fires in California except that forest management is so poor. Billions of dollars are given each year, with so many lives lost, all because of gross mismanagement of the forests. Remedy now, or no more Fed payments!

With proper Forest Management, we can stop the devastation constantly going on in California. Get Smart!

More than 4,000 are fighting the Camp and Woolsey Fires in California that have burned over 170,000 acres. Our hearts are with those fighting the fires, the 52,000 who have evacuated, and the families of the 11 who have died. The destruction is catastrophic. God Bless them all.

The California Professional Firefighters (CPF) union called President Trump’s criticism “ill-informed, ill-timed and demeaning to those who are suffering as well as the men and women on the front lines.”