Trump: Warren's 'Pocahontas' Nickname Is 'Too Good to Give Up' Even Though She 'Has No Indian Blood' 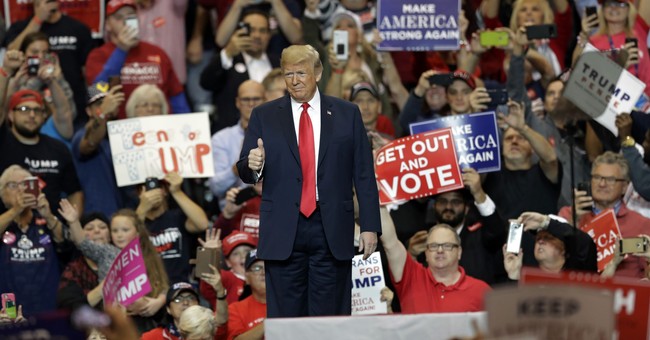 President Trump joked about his nickname for Sen. Liz Warren (D-MA) at a rally in Cleveland, Ohio Monday just ahead of the midterm elections.

Sen. Warren picked Cordray to serve as a director at the Consumer Financial Protection Bureau that she helped create. Warren called Cordray “the nerd we need” when she campaigned for him last week.

Trump quipped that he can no longer call Warren Pocahontas “because she has no Indian blood.”

“I used to go around saying I have more Indian blood than you do and I have none and I was right,” he said.

Trump then joked about the media saying “I mean the only bad thing about that is that I can’t really, legitimately call her Pocahontas anymore because the press will say I’m misrepresenting.”

Warren recently touted results of a DNA test which found that she was between 1/64th and 1/1,024th Native American. She pointed to the results as proof of the Cherokee heritage that she’s been mocked for claiming throughout her career.

Cordray and DeWine are virtually tied in the race, according to the latest polling.