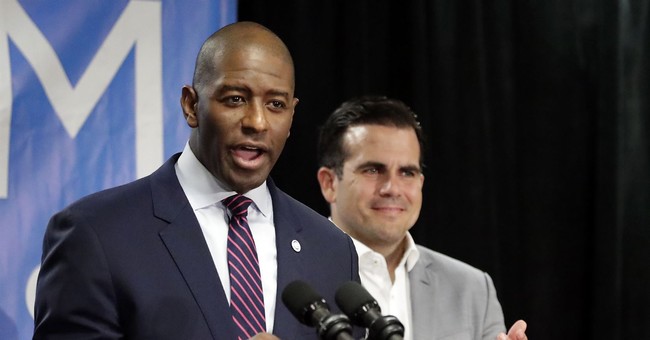 Earlier this week, Politifact gave Florida’s far-left, Democratic gubernatorial candidate Andrew Gillum a “Pants on Fire” rating for his claim that Florida’s low unemployment rate under Republican Gov. Rick Scott was due to people having “to work two and three jobs just to make ends meet.”

"I give him credit for an economy that is largely propped up on low-wage work," Gillum said. "Of course you've got a low unemployment rate when people have got to work two and three jobs just to make ends meet."

Politifact gave Ocasio-Cortez a “Pants on Fire” rating for her claim and emphasized at the time that “over the past 12 months, the number of multiple job holders has ranged between 6 million and 7 million. That compares to more than 148 million Americans who are employed in a single job.”

According to data from the Bureau of Labor Statistics, Florida has nearly full employment, and an unemployment rate of 3.7 percent as of August 2018.

Sean Snaith, the director of the University of Central Florida’s Institute for Economic Competitiveness, told Politifact that Gillum’s "claim about multiple jobs and unemployment is simply not true."

“Unemployment rates are not influenced by how many jobs someone holds, and not many people hold more than one job,” Politifact concluded regarding Gillum's statement. “We rate this claim Pants on Fire.”

Responding to low unemployment numbers with the false claim that they are due to people working multiple jobs seems to have become a popular position on the left.

Progressive Sen. Liz Warren (D-MA) also argued in July that due to low wages people were forced to work "two, three, or four jobs to try to pay the rent and keep food on the table."

Gillum is a Bernie Sanders-backed candidate who secured an impressive victory in his August primary. He advocates some far-left positions such as abolishing ICE and establishing Medicare for All.

Recent polling post-Hurricane Michael shows that DeSantis and Gillum are virtually tied in the tight race for governor.