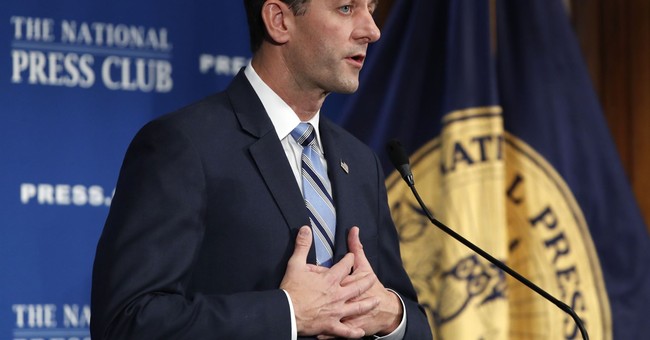 Ryan expressed confidence that Republicans will keep control of the House in the midterm elections saying, “I think our voter enthusiasm is where it needs to be and more importantly we have a great record to run on.”

“The economy is booming, the military is being rebuilt, the Veterans’ Administration is being overhauled, we have deregulated businesses so they can hire again,” he said.

"We cut taxes and we have higher revenue coming in," he said. "The economy grew 4.2 percent this quarter."

Rep. Stefanik, who is running for re-election in New York’s 21st District, emphasized that the election “is really going to be focused on results versus resistance.”

“What I know does not resonate with voters is this resistance effort where regardless of whether you agree with some of the focus of this administration, you’re unwilling to work with them," she said. “So I think both parties need to address the tribalism that is happening.”

.@SpeakerRyan: I worry about tribal identity politics becoming the new norm of how politics is waged. pic.twitter.com/lLXuRwIuL4

Ryan was also concerned about identity politics and tribalism.

“I worry about tribal identity politics becoming the new norm of how politics is waged,” he said. “As conservatives, we always thought this was sort of a left-wing Alinsky thing, unfortunately the right practices identity politics now as well.”

Both Stefanik and Ryan condemned President Trump calling Stormy Daniels a “horseface” in a tweet Tuesday.

Stefanik agreed that the remark was “unacceptable,” adding, “I’ve disagreed with the president’s rhetoric numerous times when it comes to how he addresses women.”

However, she once again emphasized that “as I’m going door to door in my district right now, voters are really paying attention to, both male and female voters, the record of results and keeping your promises, growing the economy.”