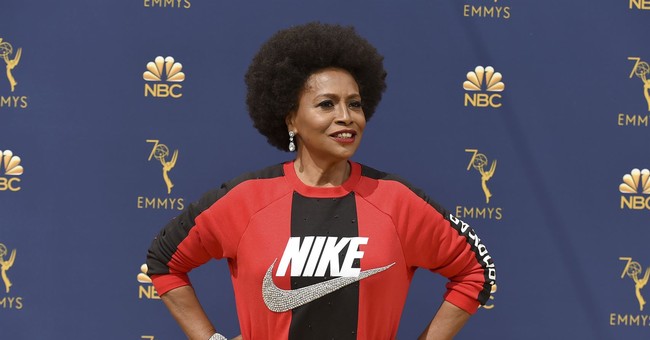 Jenifer Lewis, star of ABC’s “Black-ish” and Broadway, appeared at the Emmys Monday wearing a Nike sweatshirt in support of the company after they faced backlash for featuring NFL quarterback Colin Kaepernick as one of the faces of their brand.

“I’m wearing Nike tonight to tell them how proud I am of them for supporting Colin Kaepernick and his protest against police brutality and racial injustice,” she explained in a red carpet interview.

“I speak to the millennials tonight to tell them they are not alone in standing up, we’re right behind them,” she added. “Their ancestors are behind them who took two knees and two hands picking cotton.”

“I’m wearing Nike tonight to tell them how proud I am of them for supporting Colin Kaepernick and his protest against police brutality and racial injustice,” actress Jenifer Lewis said on the red carpet at the #Emmys https://t.co/mWuM8n2PZm pic.twitter.com/MLOtfcpu2S

She told Variety that she wanted to tell Nike: "thank you for leading the resistance. We need more corporate America to stand up also. These are not dark times, these are awakening times.”

Colin Kaepernick sparked controversy two years ago when he began taking a knee during the national anthem to protest racial injustice and police brutality.

An August NBC/WSJ found that a majority of Americans, 54 percent, believe that kneeling during the anthem is inappropriate.

Lewis was not the only star at the Emmys to get political. In response to allegations that Supreme Court nominee Judge Brett Kavanaugh sexually assaulted a woman when they were in high school, “Glow” director Jesse Peretz’s wife, Sarah Sophie Flicker, wrote “Stop Kavanaugh” on her arm along with the phone number of the U.S. Senate.