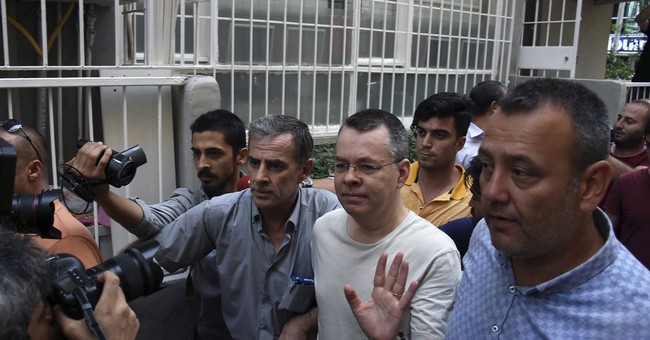 The White House is sending a clear message to Turkey that it must release American pastor Andrew Brunson to ease the growing tensions between the two countries.

A Trump administration official told the Associated Press Thursday that National Security Adviser John Bolton spoke Monday with the Turkish ambassador to the U.S. telling him to release Brunson.

President Trump tweeted Thursday evening calling for Brunson’s release, saying that the U.S. “will pay nothing for the release of an innocent man, but we are cutting back on Turkey!”

Turkey has taken advantage of the United States for many years. They are now holding our wonderful Christian Pastor, who I must now ask to represent our Country as a great patriot hostage. We will pay nothing for the release of an innocent man, but we are cutting back on Turkey!

The Trump administration has already sanctioned two Turkish leaders over the pastor’s imprisonment.

Treasury Secretary Steve Mnuchin said during a cabinet meeting Thursday that the U.S. is prepared to levy more economic sanctions against Turkey if Brunson is not released.

During the meeting, Trump remarked that Turkey has “not proven to be a good friend.”

Pastor Brunson, an evangelical from North Carolina, was arrested in Izmir, Turkey in October 2016, and was accused without any evidence of helping terrorist groups and of engaging in espionage. He was recently moved from prison to house arrest.