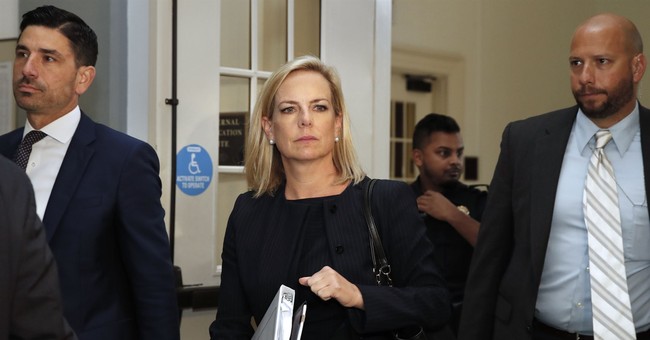 Sen. Dick Durbin (D-Ill) joined a number of high-ranking Democrats who are demanding the resignation of Department of Homeland Security Secretary Kirstjen Nielsen over the Trump administration’s zero tolerance policy of prosecuting migrants entering the U.S. without authorization, which resulted in separating families at the border.

“I am today calling on the architect of this humanitarian disaster Department of Homeland Security Secretary Kirstjen Nielsen to step down,” he said during a Senate Judiciary Committee hearing.

“The family separation policy is more than a bureaucratic lapse in judgment. It is and was a cruel policy inconsistent with the bedrock values of this nation,” Durbin said. “Someone in this administration has to accept responsibility.”

Federal immigration officials defended their policies before the Senate Tuesday.

They said that they have “records of migrants who have been detained and have documentation of parents who left the U.S. without their children.”

Commander Jonathan D. White of the U.S. Public Health Service Commissioned Corps, who is helping to run efforts to reunite these families, called “a family's decision to leave children behind ‘a desperate last act of a parent’ that he said is ‘unfathomable until you've walked in those parents' shoes,’” the Associated Press reports.

Acting Chief Carla L. Provost of the U.S. Border Patrol emphasized that "we do not leave our humanity behind when we report for duty" and pointed out that the separation of children from parents is not "unique" to the Trump administration. She said CBP has prosecuted adults for entering the U.S. illegally in prior administrations.