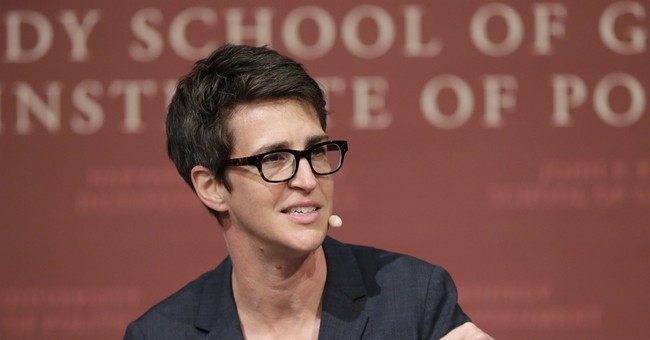 MSNBC’s Rachel Maddow accused the White House Tuesday evening of editing out a key question for Russian President Vladimir Putin in Helsinki last week about whether he had wanted President Trump to win the 2016 election. Putin answered in the affirmative. However, the White House’s transcript is missing part of the question.

The Washington Post explained Wednesday that the error was due to a technical issue and not because of intentionally deceptive editing by the White House.

"President Putin, did you want President Trump to win the election and did you direct any of your officials to help him do that?" Reuters reporter Jeff Mason asked.

"Yes, I did. Yes, I did. Because he talked about bringing the U.S.-Russia relationship back to normal," Putin answered in Russian.

But in the White House transcript, the question is cut off to read "And did you direct any of your officials to help him do that?"

Maddow asserted during her show that "the White House has disappeared from the official U.S. government record" the question, arguing "it wasn’t a mistake, it was on purpose."

“What happened?” The Post’s Philip Bump asked. “If you watch the videos, it’s pretty clear. At some point in the middle of that question, there’s a switch between the feed from the reporters and the feed from the translator. In the White House version of the video, you can hear the question being asked very faintly under the woman who is translating saying ‘president.’”

“You can hear the same audio in The Post’s feed, starting at about a minute in,” he added. “We did not edit the question out. This is the feed we were provided.”

“Our transcript and the White House’s were apparently based on the feed that runs only in the right channel,” Bump explained. “A White House official told CNN’s Abby Phillip that its transcript ‘did not have Mason’s audio turned up in time,’ referring to Reuters reporter Jeff Mason, who asked the question.”

“This is not a conspiracy from the White House,” Bump concluded. “While the White House certainly has a track record of misrepresenting facts, this would have been a remarkably futile revision of reality to attempt. As it turns out, they didn’t.”

In response to The Post’s clarification, Maddow doubled down Wednesday arguing in a tweet thread that “nothing here from WaPo disproves our report” and emphasizing that the "White House has let it stand uncorrected."

This is one possible explanation for why the White House transcript & video from Helsinki doesn’t include Putin saying he wanted Trump to win.

But Putin really did say that in Helsinki...

(1): White House has let it stand uncorrected, and

I love WaPo with the heat of 1000 suns, but nothing here from WaPo disproves our report.

We’ve updated the text on our A block video clip from last night. https://t.co/phmOJnitXA

Bump replied to Maddow that her assertions that the video was edited was incorrect.

Your report asserts that the video was edited and implies that the incomplete transcript was posted intentionally. There's no evidence for the first point and my piece provides context to suggest that the second was unintentional.

No matter where you move the goalposts, Maddow asserted that the White House edited the video. That clearly didn't happen.

Last thing I'll say on the Maddow segment is that the assertion the video was edited was and is incorrect and there's no evidence that the WH intentionally left Mason's question out of what it published.

That the WH hasn't corrected is beside the point.https://t.co/VaRdlefkUy

CNN also focused Wednesday on how the White House has yet to update the error in the transcript.