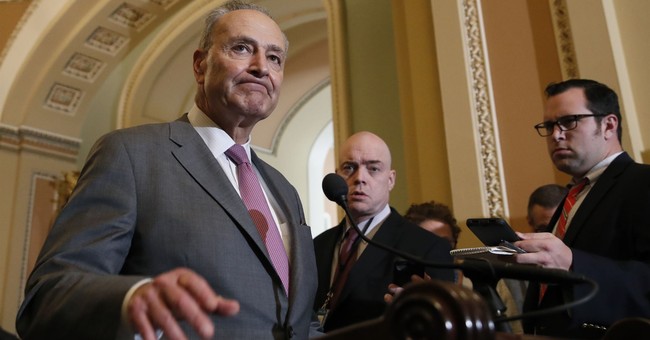 He took up their “personal liberty standard,” introduced last week, arguing that Trump’s nominee must voice his or her support for Roe v. Wade and other hot-button issues rather than the normal standard of stare decisis, which means replying as Gorsuch and others have, that they will respect precedent.

“The nominee always answers that yes, he or she will respect and defer to precedent,” he said, arguing that this “is no longer an adequate standard by which to a judge nominee.”

Schumer pointed to past conservative nominees who were later confirmed, such as Justice Gorsuch, claiming that they later acted in ways that overturned precedent.

“We have ample example from the past several years of judges who have sworn in their confirmation hearings to respect precedent and then reversed their stand once on the court,” he said.

Schumer concluded from this that “when they say they’ll obey settled law, you can’t believe it.”

He said stare decisis or respecting precedent has become “an almost meaningless bar to set for a Supreme Court nominee.”

Schumer concluded that “with so many rights and liberties at stake, U.S. senators and the American people should expect an affirmative statement of support for the personal liberties of all Americans from the next Supreme Court nominee.”

He emphasized that the next nominee “has an obligation, a serious and solemn obligation to share their personal views” on issues such as Roe v. Wade and the healthcare law.

“It is near impossible to imagine that President Trump would select a nominee who isn’t hostile to a woman’s freedom to make her own healthcare decision,” Schumer claimed.

On Thursday, the nation’s largest abortion provider Planned Parenthood, along with the abortion advocacy group NARAL, called on the Senate to demand a new “personal liberty standard” of forcing the nominee to affirm abortion.

“We are calling for a personal liberty standard,” Dawn Laguens, Executive Vice President of the Planned Parenthood Action Fund said at the time. “The Senate must only confirm a justice who firmly declares that the constitution protects individual liberty and the right of all people to make personal decisions about their bodies and relationships, including the right to have contraception, the right to an abortion, and to marry the person who you choose.”

Ilyse Hogue, president of the abortion advocacy group NARAL, said that this "personal liberty" standard was necessary and any of President Trump’s list of Supreme court picks would “decimate our rights as enshrined under Roe.”

Schumer often defends Planned Parenthood and received a $9,000 donation from them for the 2016 election cycle. He also received $1,000 from NARAL for that cycle.