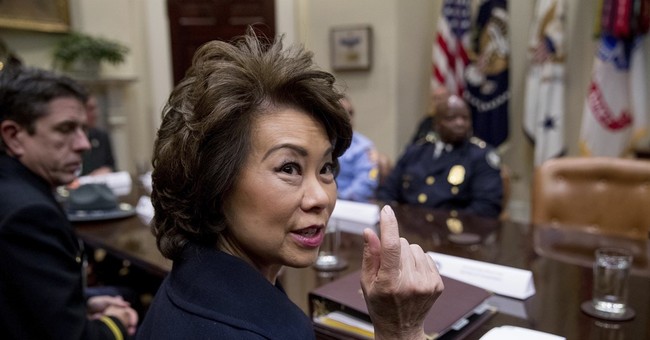 A group of protestors attempted to confront Senate Majority Leader Mitch McConnell and his wife, Transportation Secretary Elaine Chao, as they were leaving a Georgetown event Tuesday. The group of young men shouted “why are you separating families at the border?”

Unfazed, Chao walked toward the group repeatedly asking “Why don’t you leave my husband alone?”

She walked towards the protestors and repeatedly told them “he is not" separating families.

She continued to confront the protestors and defend her husband until she was guided away by security personnel.

The men screamed “how does he sleep at night” as the car left.

A group of protesters confronts Mitch McConnell and Elaine Chao with @ProPublica’s audio of children separated from their families at the border while leaving a @Georgetown event. pic.twitter.com/jRKHKBeFpC

Rep. Maxine Waters (D-CA) told supporters at a rally that they should harass and confront Trump officials in this manner.

"If you see anybody from that Cabinet in a restaurant, in a department store, at a gasoline station, you get out and you create a crowd, and you push back on them, and you tell them they’re not welcome anymore, anywhere," Rep. Waters told her supporters at the rally Saturday.