Jacketgate: Media Freaks Out About What Melania Wore on Plane Ride to Visit Immigrant Children in Texas 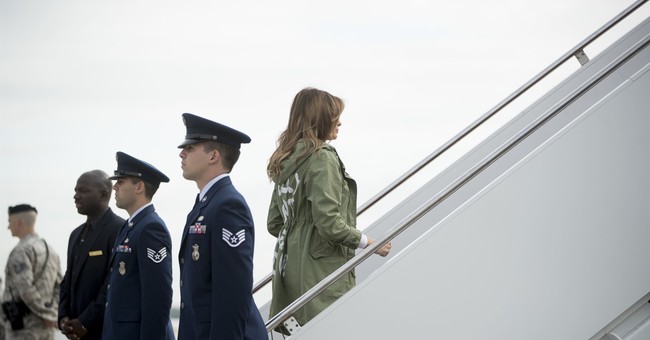 Update: President Trump responded to the media speculation Thursday evening with his own explanation of the First Lady's jacket.

“I REALLY DON’T CARE, DO U?” written on the back of Melania’s jacket, refers to the Fake News Media. Melania has learned how dishonest they are, and she truly no longer cares!

Many in the media freaked out Thursday over a jacket first lady Melania Trump wore when boarding the plane to visit immigrant children in a Texas detention center. The $39 Zara jacket reads “I really don’t care. do u?” on the back.

Melania Trump’s spokeswoman Stephanie Grisham said in a statement: "It's a jacket. There was no hidden message. After today's important visit to Texas, I hope this isn't what the media is going to choose to focus on."

She also mentioned the time the media attacked the First Lady for wearing heels when boarding the plane to visit Hurricane Harvey victims in Texas.

Here’s what Melania Trump’s spokesperson has to say about the jacket that said “I REALLY DON’T CARE, DO U?” that she wore while boarding a plane to head to the border today pic.twitter.com/PUaMFBVDHq

Today’s visit w the children in Texas impacted @flotus greatly. If media would spend their time & energy on her actions & efforts to help kids - rather than speculate & focus on her wardrobe - we could get so much accomplished on behalf of children. #SheCares #ItsJustAJacket

The first lady had changed outfits by the time the plane landed in Texas.

FLOTUS spox confirms Mrs. Trump wore a jacket to visit border kids that reads: "I really don't care. Do you?" Spox says: "It's a jacket. There was no hidden message. After today's important visit to Texas, I hope the media isn't going to choose to focus on her wardrobe." pic.twitter.com/Bp4Z8n455G

"It's a jacket. There was no hidden message." -- Melania Trump spox

Here's the thing: SOMEONE in that operation should have seen th jacket and though "Hmmm, maybe this is't the best idea." pic.twitter.com/A6JZwZ1cFd

If Michelle Obama or Laura Bush (or any first lady) wore a jacket like that to an event like this, they would have definitely been asked about it. https://t.co/CLinsG9d7t

Melania Trump's spokeswoman, via pool: "It's a jacket. There was no hidden message."

That is true. The jacket literally said in giant letters, "I really don't care. Do you?"

the media isn't CHOOSING to focus on the jacket, we are shocked that FLOTUS and her staff are so incompetent at communications that they didn't think it would be noticed given that it literally says I DON'T REALLY CARE on the back when she's going to visit kidnapped children https://t.co/aWCQuTuGnT

I think she did it on purpose. In what world does Melanie wear 40 dollar jackets from Zara in 90 degree heat in Texas? Seems to me she wanted to wear that jacket to send a message. pic.twitter.com/bdVKv7GDKl