As Immigration Showdown Looms, Rep. Brat Pushes for a More Permanent Fix to the System 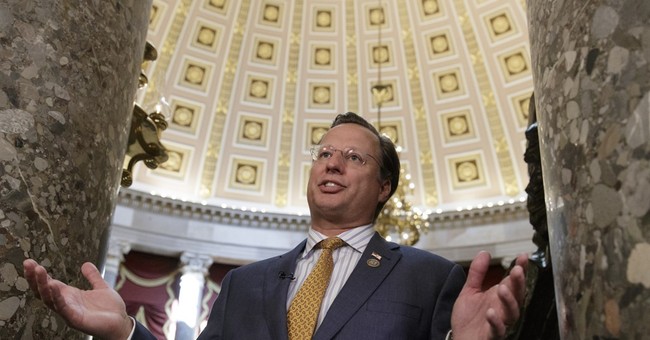 Rep. Dave Brat (R-VA) spoke with Townhall Monday about the immigration battle brewing in Congress as Democrats fight for a pathway to citizenship for Dreamers and Republicans try to beef up border security and prevent an amnesty deal.

Brat is in favor of House Judiciary Committee Chairman Bob Goodlatte’s (R-VA) “Securing America's Future Act” which he believes will fix the broken immigration system rather than temporarily address the problems with DACA, only to have them recur. He said legislation to be proposed under a discharge petition to get around leadership, will provide “huge amnesty (for) up to ten billion people for ten years.”

Brat explained that 25 Republicans are working with 200 Democrats and House Minority Whip Steny Hoyer (D-MD) to force the leadership’s hand through this discharge petition. He added that “the worst problem with that scenario is you’ll get the exact problem again in three to five years because if you just trade a border wall for huge amnesty you haven’t solved the immigration problem.”

“Hopefully we don’t do some last-minute, knee-jerk political moves where we end up replicating the same problem we have right now by passing another bill that sends a signal to the rest of the world that hey, once you make it in you’re okay,” Brat emphasized.

He is also hopeful that GOP leadership will bring Goodlatte’s bill to the House floor for a vote, which he believes will kill the discharge petition.

Brat explained that Goodlatte’s bill fixes what the amnesty proposals only defer.

“The Goodlatte bill does border security including the wall and hiring the folks we need out on the border but it also does e-verify which is a huge piece which means that you only can hire legal workers,” he said.

Brat pointed out that “President Obama in ’05 was in favor of that provision.”

He added that the bill moves toward a merit-based immigration system “where you hire folks that can fulfill our US labor market need and it also deals with chain migration which, under current law, folks can come in, invite their entire extended family.”

Chain migration was a deal breaker for Republicans in Senate Minority Leader Chuck Schumer’s (D-NY) January offer of up to $25 billion for the border wall and border security in exchange for a pathway to citizenship for Dreamers.

President Trump signaled support for the Goodlatte bill in January.

Brat voiced some frustration with Democrats' unwillingness to compromise on the issue as well as the media’s coverage.

He added that the Democrats’ resistance movement “is called resistance for a reason they don’t want to vote yes on any bill coming from Republicans or the White House.”

“When you don’t have one Democrat voting for tax cuts, not one Democrat, that’s a problem,” he emphasized.