Ireland Votes To Overturn Abortion Ban by a Landslide 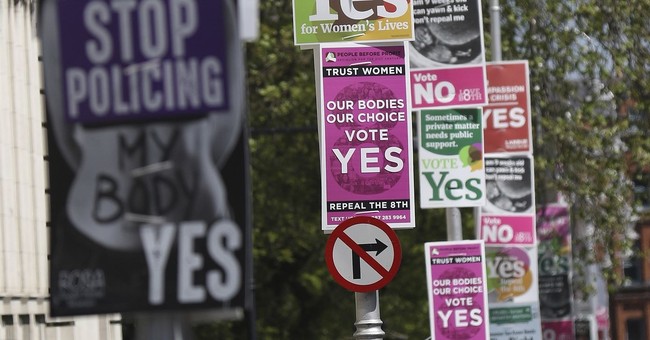 Ireland voted to repeal the eighth amendment to their constitution by a landslide Friday opening the path to legalizing abortion. The Irish electorate voted by 1,429,981 votes to 723,632 to repeal the 1983 amendment, which recognizes the equal right to life of the pregnant woman and her unborn child. A two-thirds majority, 66.4 percent, voted yes and 33.6 percent voted no.

"I said in recent days that this was a once in a generation vote,” Irish Prime Minister Leo Varadkar said Saturday. “Today I believe we have voted for the next generation."

He said the government will now move quickly to legalize abortion.

Pro-life Save the Eighth activist John McGuirk said on Facebook that he was “broken-hearted” over the repeal. He reminded others in opposition to legalizing abortion in Ireland: “Today will be a hard and difficult day, but hold your heads high. It is never wrong to speak up for what you believe in. It is wrong to stay silent, and especially wrong to stay silent when the crowd is totally against you.”

Pro-life groups in the U.S. expressed sadness at the move as well.

“We are deeply saddened to learn that many Irish people voted against love and life by repealing the 8th amendment,” Jeanne Mancini, President of March for Life commented. “Americans know from experience that there will be many grave and irreversible consequences to this decision, including the loss of precious lives. A study released this week shows that legalizing abortion greatly increases the number of children whose lives are terminated in the womb.”

“In 1979, Americans United for Life played a pivotal role in the creation of the 8th Amendment, requiring the equal protection of unborn human life and the life of the mother and making Ireland one of the strongest pro-life nations in Europe,” Catherine Glenn Foster, President of Americans United for Life said in a statement. “Today, the AUL legal team is saddened that the people of Ireland have paved the way for abortion on demand in their country. AUL offers our support to the pro-life people of Ireland – we continue to stand with you and thank you for your valiant efforts to defend life.”