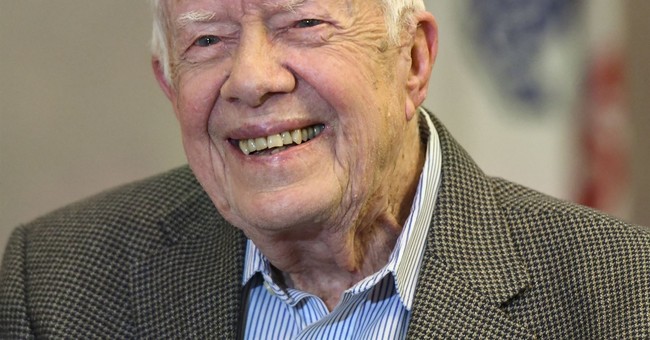 Former president Jimmy Carter told Politico Tuesday that if President Trump can reach a deal with North Korea then he deserves the Nobel peace prize.

“If President Trump is successful in getting a peace treaty that’s acceptable to both sides with North Korea, I think he certainly ought to be considered for the Nobel Peace Prize,” he said. “I think it would be a worthy and a momentous accomplishment that no previous president has been able to realize.”

Carter cautioned against making North Korea feel too isolated and offered his own advice to Trump.

He said that given that “they’re under constant belief that the United States wants to attack them, even using nuclear weapons—which many Democrats and Republican leaders in our country have mentioned as a possibility—and that we are destroying their economy,” the North Korean regime’s threats to cancel the summit are to be expected.

“I think that the next mediator, next negotiator — maybe President Trump, I hope — will reassure them that we’re willing to give up some of those things — the threat of attack on them and to lift the embargo,” Carter concluded. “That would be a cheap price, in my opinion, to pay for a cessation of their nuclear program.”

Carter offered to travel to North Korea as Trump’s envoy last year but did not get the posting.

The former president also told Politico that he thinks Trump dealt “a damaging blow to peace” in the Middle East with his decision to move the U.S. Embassy from Tel Aviv to Jerusalem.

Trump is expected to meet with North Korean leader Kim Jong Un in the coming weeks.