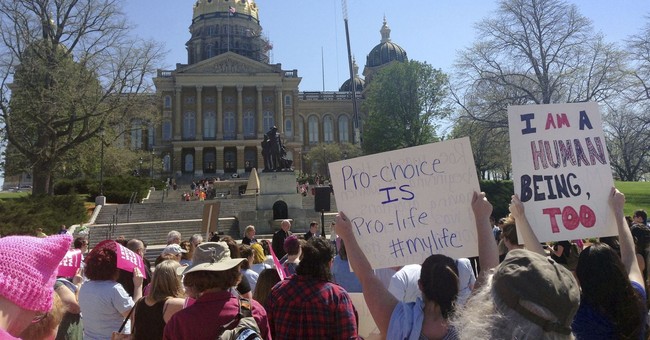 Planned Parenthood and the American Civil Liberties Union (ACLU) filed a lawsuit Tuesday against a new Iowa law, set to take effect July 1st, which bans virtually all abortions following detection of a fetal heartbeat. A fetal heartbeat can be detected as early as six weeks into pregnancy, making the legislation one of the nation’s strictest abortion laws.

The bill was signed earlier this month by Gov. Kim Reynolds and was immediately met with threats of a lawsuit from abortion groups who claim the ban is clearly unconstitutional.

Rita Bettis, ACLU of Iowa Legal Director, told reporters Tuesday that “this abortion ban is beyond extreme. With it, Iowa politicians have tried to ban virtually all abortions for women in our state. In the 45 years since Roe, no federal or state court has upheld such a dangerous law.”

“This law must not go into effect,” Dr. Jill Meadows, Planned Parenthood of the Heartland Medical Director, said. “Abortion care must remain safe and legal as an important part of basic reproductive health care.”

She claimed that if the law does go into effect, “it is likely that many more Iowans would attempt to self-induce abortions in ways that could jeopardize their health and their lives.”

“We are challenging this law on behalf of our patients and all Iowans,” Suzanna de Baca Planned Parenthood of the Heartland President said Tuesday. “The citizens of our state overwhelmingly reject attempts to restrict an individual’s rights and ability to control their own destiny. So today we fight. And we will continue to fight the efforts of anti-woman politicians to interfere in our personal health care decisions and lives.”

Iowa Gov. Kim Reynolds said she was “confident” facing the lawsuit and the state would defend the law at no cost to taxpayers.

“We feel very confident moving forward with it,” Reynolds said. “It’s important that, first of all, this is about life, it’s about protecting life and that’s first and foremost the priority and we have somebody that has agreed to represent us and do it at no cost to the taxpayers.”