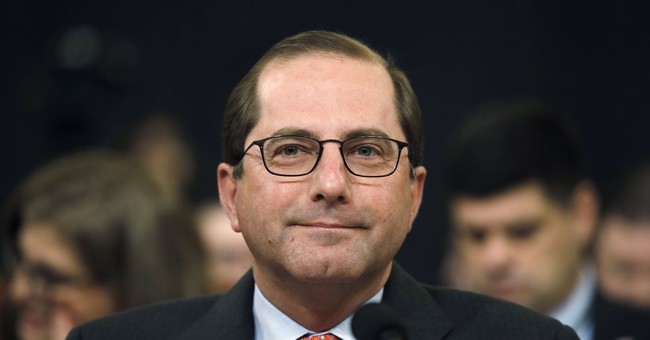 Health and Human Services Secretary Alex Azar defended Scott Lloyd, head of the Office of Refugee Resettlement, in response to criticism from Democrats and abortion groups over his decision not to refer unaccompanied minors in ORR’s care for abortions. Azar told Democrats on the House Appropriations Committee Thursday that it was a matter of longstanding policy for the ORR director to sign off on serious medical procedures.

In response to questioning from Rep. Rosa DeLauro (D-CT) about Lloyd denying access to abortions, Azar explained that Lloyd was complying with a 2008 HHS policy that requires the director of the Office of Refugee Resettlement to personally sign off on serious medical procedures for unaccompanied minors.

“There is actually a longstanding policy dating back to 2008 for providing serious medical services to these children,” Azar explained, “including involving discussing with their parents, if we can reach them, parental notification and input as appropriate complying with state law.”

DeLauro replied by claiming that Lloyd was denying the minors’ constitutional right to abortion.

“Whether you like it or not ideologically, there is a law that says they have a right to health services and to legal and safe abortions,” DeLauro told Azar. “This is a gentleman who should be gone from this position. He is not a medical doctor, he is not a psychiatrist… I’m just going to ask you flat out: When will you fire Mr. Lloyd?”

“This is simply not an issue of Mr. Lloyd,” Azar told her. “This is the statutory obligation of the director of the Office of Refugee Resettlement to coordinate and implement the care and placement of these minors including providing for serious medical service to them.”

“So you’re not going to do that and you’re going to put their health in jeopardy?” DeLauro asked Azar.

“I certainly appreciate any concerns you have, but I do want to make very clear this is not about Mr. Lloyd. This is the long-standing policy and procedures of the Department of Health and Human Services,” Azar reiterated.

Harris went on to express concerns about making the U.S. "a place to come if you want an abortion and in your country it’s illegal and you know countries around the world have a right to restrict abortion.”

Harris applauded Azar for the HHS policy saying “a non-citizen coming to the United States actually doesn’t have a constitutional right to abortion and you should respect that they could come from cultures where it is not as widespread and accepted as unfortunately it is here.”

Abortion groups have been calling for Scott Lloyd’s firing ever since the American Civil Liberties Union made public his deposition remarks that he does not believe that unaccompanied minors have a constitutional right to abortion. The ACLU is seeking a permanent injunction against ORR’s policy. In three cases that the ACLU has been involved in, the girls got abortions, and a fourth was released to a sponsor.

The October case of Jane Doe, an unaccompanied minor who sought and obtained an abortion while in one of ORR’s federally funded shelters, started the legal battle between the Trump administration and the ACLU on this issue. The DOJ filed a Supreme Court petition in the case of Doe in November, arguing that ACLU attorneys misled them as to the timing of her abortion before they had a chance to file an appeal in the case.

ORR told Politico about their policy in October arguing that, in Doe’s case, they are “providing excellent care to this young woman and her unborn child and fulfilling our duty to the American people,” but “there is no constitutional right for a pregnant minor to illegally cross the U.S. border and get an elective abortion while in federal custody.”