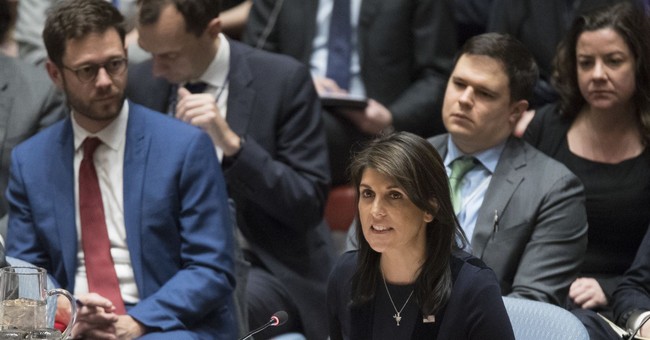 U.S. Ambassador to the United Nations Nikki Haley called for accountability for Russia over the poisoning of former Russian spy Sergei Skripal and his daughter, Yulia, in Britain with a chemical nerve agent earlier this month.

"The United States believes that Russia is responsible for the attack on two people in the United Kingdom, using a military-grade nerve agent,” Haley said Wednesday in her remarks at the UN Security Council’s emergency session. “Dozens of civilians and first responders were also exposed. Our thoughts and prayers go out to the victims of this atrocious crime."

"If we don't take immediate, concrete measures to address this now, Salisbury will not be the last place we see chemical weapons used," Haley warned. "They could be used here in New York or in cities of any country that sits on this council.”

“This is a defining moment,” she emphasized.

Haley expressed alarm over the "increase in the use of chemical weapons," recently by North Korea and Syria.

"A growing concern in all of this dangerous and destabilizing activity is Russia," she said. "Russia failed to ensure Syria destroyed its chemical weapons program. Russia killed the joint investigative mechanism when it found [Bashar] Assad liable for chemical attacks. Russia used its veto to shield Assad five times last year."

"Time and time again, member states say they oppose the use of chemical weapons under any circumstance,” Haley concluded. “Now one member stands accused of using chemical weapons on the sovereign soil of another member. The credibility of this council will not survive if we fail to hold Russia accountable."

The United Kingdom concluded earlier this week that Russia was behind the attempted murders and used a nerve agent, Novichok, developed by the Soviet Union. UK Prime Minister Theresa May responded to the attempted assassination by expelling 23 Russian diplomats after Russia missed the Tuesday deadline to give a plausible explanation for the attack.