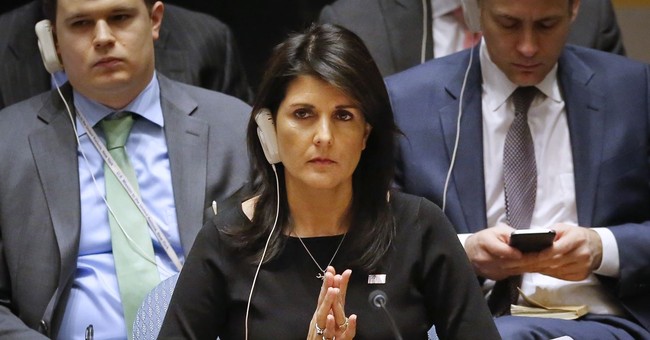 U.S. Ambassador to the United Nations Nikki Haley gave a very well-received speech at the American Israel Public Affairs Committee conference Monday. She said that Israel gets bullied at the United Nations and that she, and the U.S., won’t stand for it anymore.

"At the UN and throughout the UN agencies, Israel does get bullied,” she said. “It gets bullied because the countries that don't like Israel are used to being able to get away with it, that just doesn't sit well with me."

“I have absolutely no patience for bullying,” she emphasized. "We will not stand for it any longer."

"We will not tolerate a situation that a world body of 198 countries can spend half their time attacking one country: Israel," Haley said. "What used to be a monthly Israel bashing session now at least has more balance. But we're never gonna put up with bullying."

“This was not something that was created by the location of an embassy,” Haley added. “This is not something that was created by an American decision. America did not make Jerusalem Israel’s capital. What President Trump did, to his great credit, was recognize a reality that American presidents had denied for too long. Jerusalem is the capital of Israel. That’s a fact. And President Trump had the courage to recognize that fact when others would not.”

“There’s nothing wrong with showing favoritism towards an ally; that’s what being an ally is all about,” she said, “our approach on Israel is tied to one major idea — the simple concept that Israel must be treated like any other normal country.”

Haley also brought up the words of top Palestinian negotiator, Saeb Erekat, saying “he told me to shut up. Mr. Erekat, I will always be respectful, but I will never shut up.”