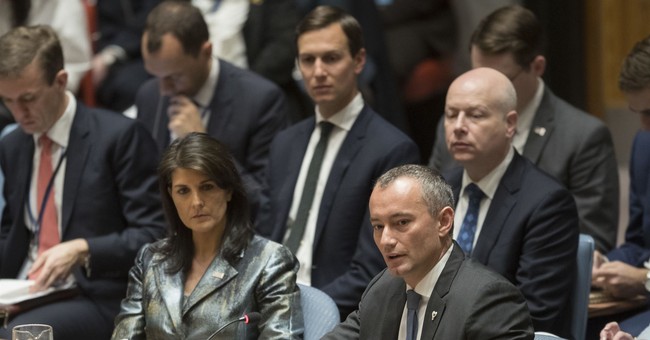 Palestine Liberation Organization Secretary General Saeb Erekat recently told Nikki Haley, our U.S. ambassador to the United Nations, that she "needs to shut up and realize the Palestinian leadership is not the problem."

He was reportedly not happy with a speech Haley gave in January in which she excoriated Palestinian Authority President Mahmoud Abbas for his anti-Semitism.

"He invoked an ugly and fictional past, reaching back to the 17th century to paint Israel as a colonialist project engineered by European powers," Haley said of Abbas's recent comments.

Between Haley's rebuke of Abbas and President Trump's decision to move the U.S. embassy in Israel from Tel Aviv to Jerusalem, Erekat accused the Trump administration of trying to "overthrow" Palestinian leaders. Abbas, Erekat said by way of defense, has "led the peace process and promoted the principle of the two-state solution." It would be better if Haley just "shut up," he offered.

She politely "declined" that advice Tuesday.

"We welcome you as the leader of the Palestinian people here today," Haley said. "But I will decline the advice I was recently given by your top negotiator, Saeb Erekat. I will not shut up. Rather, I will respectfully speak some hard truths. The Palestinian leadership has a choice to make between two different paths. There is the path of absolutist demands, hateful rhetoric, and incitement to violence. That path has led, and will continue to lead, to nothing but hardship for the Palestinian people."

"Or, there is the path of negotiation and compromise," she continued. "History has shown that path to be successful for Egypt and Jordan, including the transfer of territory. That path remains open to the Palestinian leadership, if only it is courageous enough to take it."

Haley has been a force since she became one of America's voices on the world stage. Before her no nonsense response to Erekat, she told the international community the U.S. would be taking names of those who opposed the Jerusalem embassy move.

Despite the aggressive rhetoric, Haley has also indicated that the U.S. is by all intents and purposes on the side of peace.

"I sit here today offering the outstretched hand of the United States to the Palestinian people in the cause of peace," she said Tuesday.