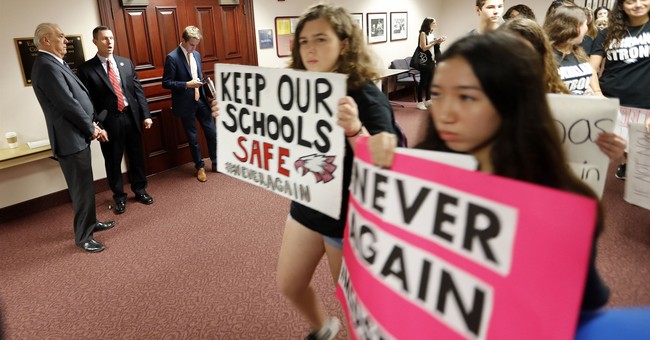 David Hogg, a senior at Marjory Stoneman Douglas High School who survived the horrific shooting last week that left 17 of his classmates dead, spoke with Fox News Wednesday and clarified that he respects “99.9 percent” of NRA members but he and his classmates were pushing for change to prevent tragedies like the one that happened at his school.

“I’m going to make something clear here,” he told Fox’s Harris Faulkner. “We’re calling out the NRA a lot and 99.9 percent of the people that are in the NRA are responsible, safe gun owners and I respect them for that, joining an organization that wants to support safe gun ownership is excellent.”

“What we’re arguing against here are the people that are at the top,” he explained, “that are at the oligarchy that are owning this country and not letting the citizens’ voices being heard and I think that’s what we as Americans, not as Democrats and Republicans, that’s what we as Americans need to channel all of our anger and passion into and that’s these corrupt politicians and changing that.”

“Midterms are coming up,” he concluded, “I don’t care if you’re a Democrat or Republican so long as you support somebody that wants some form and some step in some sort of direction where we’re trying to save kids’ lives, what can be more nonpartisan than that?”

Hogg also told CNN that he doesn't "want to take a constitutional right away from American citizens."

He said he thinks Americans should be able to own a gun if they are mentally stable, don't have previous major convictions and are "not going to go out and commit these atrocities."

Hogg was joined by many of his classmates in meeting with elected officials at the Florida capitol to discuss changes to gun laws and mental health funding.