Rubio Says the Florida Shooter Should Be Executed 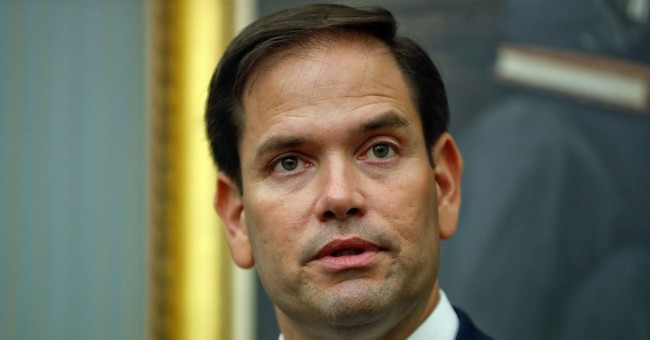 Sen. Marco Rubio (R-FL), in an interview with CBS Miami, was asked if he believed Nikolas Cruz, the 19-year-old behind the shooting in a Florida high school that left 17 dead, should receive the death penalty. Cruz has been charged with 17 counts of premeditated murder.

BONUS CLIP: In our interview, @marcorubio says he believes Nikolas Cruz should be executed.
This portion of the interview didn't make Facing South Florida coming up at 11:30 am on @CBSMiami pic.twitter.com/qXK1z6VHW7

"The answer is yes," Rubio said, but added that in general he has concerns about the death penalty.

Finkelstein, whose office is representing Cruz, pointed to missed warning signs regarding the teen’s mental state.

"Because that's what this case is about. Not, did he do it? Not, should he go free? Should he live or should he die," Finkelstein said. "He will never see the light of day again, nor should he. But I know personally I am very upset and angry that we all failed to spot a problem and do anything as a result."

Michael J. Satz, the state attorney for Broward County, told the AP Saturday that, "This certainly is the type of case the death penalty was designed for." He added that his office is working with law enforcement and will be announcing what penalty it plans to seek.

The FBI has been facing scrutiny over their handling of a tip in January warning that Cruz had the potential to perpetrate a school shooting. The agency acknowledged Friday that some “protocols were not followed” after they obtained the tip.