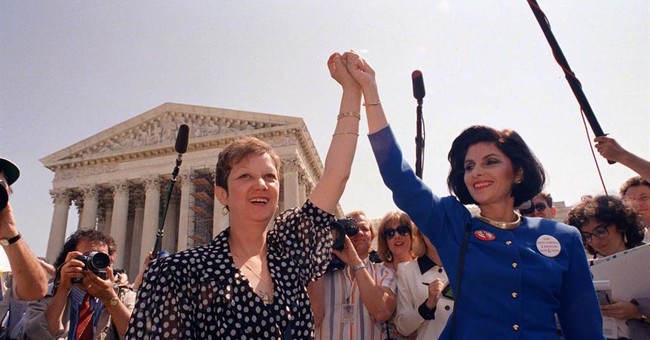 Actor and producer Nick Loeb spoke with Townhall recently about his upcoming feature-length film ‘Roe v. Wade’ that tells the untold story behind the 1973 Supreme Court decision that legalized abortion. Loeb calls the film a “war movie essentially” saying it’s “a social war movie,” that shows those behind legalizing abortion and those who fought them.

While the movie is about historical events, Loeb described the film as a “little bit of a conspiracy movie,” comparing it to Oliver Stone’s “JFK.” The film illustrates Planned Parenthood and the media manipulating and lying to Norma McCorvey, Jane Roe in the case, and the public as part of their push to legalize abortion in America. The film also explores the foundations of the pro-life movement as many emerged to fight the legalization of abortion.

Loeb is teaming up with Alveda King, niece of Martin Luther King Jr. and pro-life advocate, Academy award winner Jon Voight, Stacey Dash, and Stephen Baldwin to make the film through a crowdfunding campaign at www.RoevWadeMovie.com. They hope to start shooting the film by the end of the spring.

Loeb explained some of the lies involved in what the movie dubs “the most corrupt court case in history.”

“All she wanted was to have an abortion,” he said of Norma McCorvey. She was already in her second trimester when the attorneys met with her. She told them she just wanted an abortion, asking if she would be able to get one. “They outright lied to her and said yes,” Loeb said. The courts don’t work that quickly and McCorvey never got her abortion.

Loeb says the film tracks judicial corruption and media manipulation as the case makes its way to the Supreme Court where, after some intrigue, the justices voted 7-2 in favor of legalizing abortion.

The movie also follows the story of Dr. Mildred Jefferson, the first African American woman to graduate from Harvard medical school, who ended up being the second president of National Right to Life. Loeb says Jefferson’s opposition to abortion came from taking the Hippocratic Oath as a doctor to save lives not to kill them but also her belief that “abortion was the number one killer of African Americans in our country.”

Jefferson’s efforts clash with Margaret Sanger’s infamous “Negro Project.” Loeb says the movie opens with Sanger's speech at a Ku Klux Klan meeting, in which she details her efforts to reduce the population of African-Americans.

The story has not been an easy one to tell. Loeb spoke of the many obstacles he’s faced in making the film, including Facebook briefly banning them from sharing the crowdfunding link and from advertising.

Facebook claimed they “were spamming by inviting our friends,” Loeb says. Facebook eventually backed down and said the ads were disapproved “in error.”

Loeb still worries that Facebook “has a monopoly on promoting online to crowdfund,” given all the problems they’ve experienced about allowing the 'Roe v Wade' movie to advertise.

He discussed his own path to the pro-life movement as well. He said an ex-girlfriend had an abortion in college and that “had a long-lasting effect” on him. Loeb wrote more about this in a 2015 New York Times op-ed about the legal battle he’s in with his ex-fiance, ‘Modern Family’ star Sofia Vergara, over custody of frozen embryos they created.

“I know the sex of them,” he said, “they’re two girls and they’re five days old and you know they’re lives, they’re individual distinct lives.”

“Technology today I think really changed the scope of the argument,” Loeb said of the pro-life cause in general. He said one of his film’s characters, Dr. Bernard Nathanson is an example of this.

“Dr. Bernard Nathanson, he was the biggest abortionist in history. He committed over 70,000 abortions and was a leader in the pro-choice movement,” Loeb said, “he realized that he could commit an abortion under a sonogram and realized this is actually killing a human being and he has a major conversion and becomes pro-life and becomes a major leader to protect and fight for life.”

Nathanson, originally the founder of the abortion advocacy group NARAL, ended up making a controversial documentary in 1989 called ‘The Silent Scream’ which depicts an abortion under a sonogram to show people what the unborn child undergoes in the procedure.

“Technology today is moving faster than the law,” Loeb said, “and I think the laws need to catch up to technology.”

He hopes his movie “will open up the eyes of people to know what the truth is.”