Doug Jones Claims Moore Has Been 'Consistently Wrong' on the Constitution 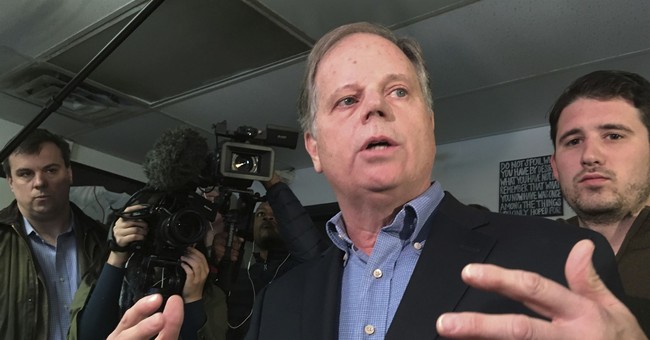 Democratic Alabama Senate candidate Doug Jones cast a vote for himself Tuesday morning in the Alabama special election, which is being closely watched due to the sexual misconduct allegations against Republican candidate Roy Moore. Jones dismissed Moore’s statement that, if he is elected, the Senate has no constitutional right to remove him for ethics violations committed prior to the election.

Jones held up his ballot to reporters Tuesday saying his vote is no secret and answered a reporter’s question regarding Moore telling a radio station this morning "that if he’s elected the Senate will not have the constitutional right to remove him for ethics violations prior to being elected.”

“What I say to that is that Judge Moore has been consistently wrong about the constitution in everything he has done,” Jones replied.

He added that he would not answer the question of whether there should be an ethics investigation if Moore is elected because he “doesn’t think we’re going to get that (election outcome).”

Eight women have accused Moore of sexual misconduct, and some of the woman say he groped or assaulted them when they were just 14 and 16 and he was in his 30s. Moore denies the allegations.

The question of how the Senate could react if Moore wins is not one with a clear-cut answer. Expulsions from the Senate over misconduct have not occurred recently, with one legal scholar noting in the LA Times that “in the Senate, there have been 15 expulsions. During the Civil War, 14 senators were unseated for cooperating with the Confederacy. Another was expelled in 1797 for treason.”

Article I, Section 5 of the U.S. Constitution states that “each House [of Congress] may determine the Rules of its proceedings, punish its members for disorderly behavior, and, with the concurrence of two- thirds, expel a member.”

However the question of how this applies to conduct committed prior to an election and how it might interfere with the will of the state of Alabama, muddies the waters. Many are concerned about the precedent it would set to allow a senator chosen by the people of Alabama to be expelled for conduct prior to the election.

Three senators have suggested expelling Moore if he wins so this question may be widely discussed in the coming days depending on how the Alabama special election goes Tuesday evening.