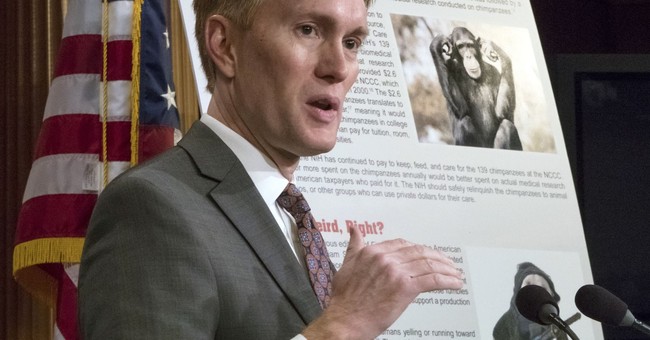 The National Endowment for the Arts (NEA) featured prominently in Lankford’s report for their $30,000 grant for the production of “Doggie Hamlet” which “actually includes humans yelling or running toward very confused sheep and dogs" and “does not include any actual lines from Hamlet.” The production was “conducted outdoors in a 30-by-50-foot eld in New Hampshire.”

The Washington Free Beacon initially called attention to Doggie Hamlet describing it as “actors in federally funded show yell and run at sheep in field for ‘postmodern dance.’”

However, The New York Times rushed to the Danish pooch’s defense clarifying that “‘Doggie Hamlet’ doesn’t retell that story but borrows from it to look at, in part, what it means to be a citizen of the world, nature included.”

The creator of the show says that “the production plays with how narrative lives in art. ‘It works with these very ancient practices and symbols of culture,’ she explained, ‘which are shepherding and dancing.’”

The New York Times Dance section says the production is art and “lives in both the symbolic world and the real world, and while she (the show’s creator) might not be spelling out a message, she’s asking questions: What does it mean to follow? What is instinct, and how does that differ from a reaction? What is our relationship to animals and to land?”

Lankford’s report goes on to highlight the $2.6 million in annual National Institutes of Health (NIH) funding that goes towards the medical care for chimpanzees which were formerly used for biomedical research that was discontinued in 2015. The report points out that “the annual funding for 139 chimpanzees translates to roughly $18,700 per chimp per year, meaning it would likely be cheaper to enroll all 139 chimpanzees in college since that amount would more than pay for tuition, room, and board in many state universities.”

It is unclear, the report concludes, why the NIH chooses to “keep, feed, and care for the 139 chimpanzees at their NCCC (National Center for Chimpanzee Care). The $2 million or more spent on the chimpanzees annually would be better spent on actual medical research to benefit the American taxpayers who paid for it.

“The NIH should safely relinquish the chimpanzees to animal sanctuaries, zoos, or other groups who can use private dollars for their care,” they conclude.

The report also points out that the Department of Defense’s Inspector General “recently reported that the Department is unable to track more than $1 billion in equipment, including small arms, mortars, and Humvees, that were purchased for Iraqi security forces with funds appropriated in FY15 and FY16.”

The equipment, which was transferred through the Iraq Train and Equip Fund (ITEF), could not be tracked because the Army ‘did not have effective controls to maintain complete visibility and accountability of ITEF equipment in Kuwait and Iraq prior to transfer to the government of Iraq.’”

The report emphasizes that “to not be able to fully account for more than $1 billion in equipment that includes guns and entire Humvees is unacceptable and a national security risk,” and that before Congress allocates funds in the future, they should “work with the DOD to put in place a system to track equipment from purchase to transfer and every step in between.”

While the report says that the nation is currently $20.49 trillion in debt, and ran a $666 billion deficit in 2017, it does point out some things that have been addressed from Federal Fumbles reports from past years.

“A number of burdensome regulations were highlighted in the last two editions of Federal Fumbles,” the report says. “This year, the Trump Administration has reduced the regulatory burden on the economy by $22 million and managed to eliminate 16 old regulations.”

The Department of Justice (DOJ) announced in 2017 that it was ending a litigation slush fund pointed out in the 2016 Federal Fumble report in which “settlements reached between defendants and the DOJ often went to groups that were ‘favored activist groups that would not otherwise receive federal money as the DOJ leadership would like.’”

“During 2017, we’ve worked to roll back wasteful spending and a number of harmful and burdensome regulations from the two previous Federal Fumbles reports,” Sen. Lankford commented. “The outrageous federal deficit remains too high. Unfortunately, Washington, DC seems to be distracted and the deficit has started increasing again. Our $20 trillion national debt will continue to increase until we implement spending cuts, government reforms, and create a healthy economy.